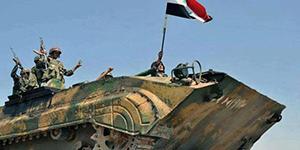 Provinces, SANA- Syrian Arab Army units achieved a significant advancement in their military operations against the ISIS terrorists in the eastern countryside of Homs central province.

A military source told SANA that army units continued to advance after carrying out intensive operations against fortifications and dens of the ISIS terrorists in the eastern countryside of the province, establishing control over al-Wahhabieh village, 5 km to the west of Manoukh village.
The source added that heavy losses were inflicted upon the ISIS terrorists in the personnel and equipment, in addition to destroying their fortifications and an amount of their arms and ammunition.
Deir Ezzor
Many ISIS terrorists were killed during the Syrian Arab Army units’ operations, backed by the air force, against their gatherings and movements in Deir Ezzor.
SANA reporter said that the air force launched intensive strikes on the movements, positions and fortifications of ISIS terrorists in the surroundings of the al-Maqaber “cemeteries” area, al-Panorama, Hweijet Sakr, the neighborhoods of al-Hweiqeh and al-Rishdiyeh and Ayash village, destroying some of those sites and killing or injuring many of the terrorists.
The reporter noted that the army units clashed with ISIS terrorists on the western and southern axes, al-Maqaber and the surroundings of the airport, leaving many of them dead.
Local sources said that a group of locals killed two ISIS terrorists after destroying their cars in Sheikh Yaseen neighborhood in Deir Ezzor city, while two others of foreign nationalities were injured in clashes with the locals of al-Jalaa village in al-Bukamal in the eastern countryside.
The sources pointed out to the state of chaos within the ranks of ISIS terrorists and the recurrent eruption of clashes among their groups, the last of which was during a meeting held in al-Bukamal and broke out among the so-called “members of the committee authorized to administer the organization in Syria”. The infighting happened against the drop of attempting to curb Iraqi terrorists and isolating them from several leadership positions in the organization.
The sources also noted that new ISIS terrorist groups fled from their spread areas in the eastern countryside of Deir Ezzor, including the terrorists Ali Abdul al-Hamid al-Bahr, Muhannad Abdul al-Rahman al-Omar, Abdel al- Fattah Ibrahim al-Fandi, Emad Abdul Razzaq al-Ali al-Bahr and Mohammed Abdul al-Rahman al-Bahr.