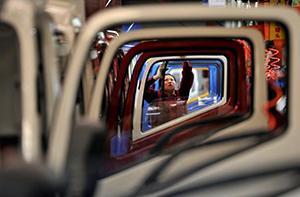 Total new business grew at the strongest rate in more than three years, while export orders saw the sharpest increase in over seven years, pointing to robust demand at home and abroad.

The Caixin/Markit Manufacturing Purchasing Managers’ Index (PMI) rose to 51.6 in August, compared with 51.1 in July and beating economists’ expectations for a slight dip to 50.9.

The reading remained above the 50-point mark that separates growth from contraction for the third straight month.

The Caixin readings followed a similarly stronger-than-expected official manufacturing survey on Thursday, though the official reading had shown a softening in export orders for Chinese goods.

The private survey tends to focus on smaller firms while the official PMI covers mostly larger firms, many of them state-owned manufacturers.

In line with the official survey, Caixin’s PMI also showed stronger increases in input and output prices, with companies passing on price increases to their customers.

Prices of industrial commodities and building materials, in particular, have surged in China this year due to a year-long construction boom and government efforts to reduce excess capacity by shutting inefficient and heavily polluting mines and mills.

The survey also showed manufacturers stepped up purchases of parts and materials for the third straight month as orders continued to increase, with business confidence hitting a five-month highs.

“Overall operating conditions of the manufacturing sector improved further as market demand strengthens, but if prices rise too quickly the profitability of companies in the middle of a supply chain may be under pressure.” Zhengsheng Zhong, Director of Macroeconomic Analysis at CEBM Group, said in a note accompanying the data release.

Futures prices for steel reinforcing bars used in construction have risen around 11 percent so far this month and 51 percent this year.

While the Caixin output reading slipped slightly, the new export orders sub-index surged to 54.6, the highest reading since March 2010.

After a two-year slump, China’s exports have rebounded this year on the back of strong global demand while avoiding any major pitfalls from rising protectionist rhetoric from U.S. President Donald Trump.

China’s economy grew by a faster-than-expected 6.9 percent in the first half, with exports and retail sales adding to the momentum from an infrastructure building spree and record lending by state-controlled banks last year.

And while China watchers still maintain the economy will start to lose some steam eventually, as higher financing costs for companies and a cooling property market start to weigh on activity, some are starting to raise growth expectations for the year.

Moody’s said on Wednesday that surprisingly strong data in the first half of the year had prompted it to raise its 2017 growth forecast for China to 6.8 percent from 6.6 percent.