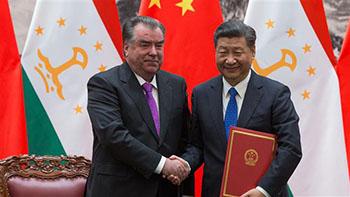 China and Tajikistan have agreed to exchange security intelligence as part of an upgrade to their diplomatic relations.
China’s Foreign Ministry released a statement on its website on Thursday announcing the establishment of a “comprehensive strategic partnership” between the two countries during a state visit by Tajik President Emomali Rahmon to China.

Rahmon and Chinese President Xi Jinping agreed during a meeting to “strengthen communications between defense, security, and law enforcement departments and deepen intelligence exchanges,” the statement read.
The Tajik president started a seven-day state visit to China at Xi’s invitation on August 30.
In June, the two presidents had met during the Shanghai Cooperation Organization (SCO) summit in Astana, Kazakhstan.
During Rahmon’s visit to China, Xi said that the repeated meetings of the two leaders within three months showed their “special and high level” ties.
Rahmon described China as a “good neighbor, partner and brother” and said that Tajikistan agreed with Beijing’s policy of “One Road, One Belt,” which China hopes could boost its trade westward and across Eurasia.
On Thursday, Chinese Premier Li Keqiang and top legislator Zhang Dejiang met with Rahmon in separate meetings.
China has been the main foreign investor in Tajikistan. Chinese companies have been expanding their activities in the former Soviet state over the past years.
Last year, China agreed to finance and build several outposts for Tajik border guards and other facilities along the 1,345-kilometer border between Tajikistan and Afghanistan.
Strategic investment in Tajikistan’s infrastructure, a country which suffered huge destruction during its bitter civil war from 1992 to 1995, could further expand China’s role in Central Asia, a region that has often resisted Western dominion and has had a more favorable view of the East.