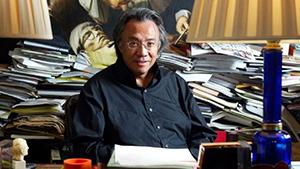 Tributes are pouring in for Hong Kong businessman and socialite David Tang, who has passed away in the UK at age 63.

Elegant, incisive and funny, David Tang has been a frequent contributor to the BBC over decades.

“Always fun to work with him,” senior producer Mantej Deol recalls. “He used to tease me whenever I asked him to do a BBC interview.”

“Yes David, from a billion people I would choose you! And then he would fall about laughing.”

Much of the coverage of Mr Tang’s life has focused on his party lifestyle, his rich and famous friends and his royal connections.

But there was a seriousness behind the playboy.

His friends in Hong Kong say his true legacy – tireless promotion of his birth city, and of Chinese culture – will live on long after his untimely death.
Pioneer and patriot

Hong Kong-based American businessman Mitch Presnick first met Mr Tang in 1996, when he sought to join the China Club, a number of related clubs in Hong Kong, Beijing and Singapore that hark back to Shanghai night life of the 1930s.

The China Club in Hong Kong is full of Mao memorabilia, as well as a very valuable collection of modern Chinese art.

Despite his obvious pride in his cultural roots, Mr Tang was respected and highly sought after for his views on China because he was neither a China basher, nor a “panda hugger”.
Defending Hong Kong’s political ambitions

At a series of debates at the Oxford Union in 2012, the businessman argued forcefully against the motion that “the future belongs to China”.

He criticised the “blanket of opacity” that characterises decision-making at the highest echelons of power in Beijing.

“This has created an enormous amount of mistrust,” he said. “And not surprisingly, there are continued protests all over the country… on abuses of power involving bribery and corruption and social injustices.”

His insights also extended to his birthplace of Hong Kong, which has been wracked with political division in recent years between pro-democracy and pro-China forces.

“Our government has been growing apart from the people of Hong Kong and they must anticipate trouble. Already, there are over one million people in Hong Kong who are trapped by poverty, and they cannot be too pleased about the government,” he told a packed house.

“It is a shameful state, scandalous if you ask me. Then there was the Umbrella Movement, which clearly demonstrated the resolution of many ordinary people taking real democratic power seriously.”
Image copyright Reuters
Image caption For months, the 2014 protesters rallied for more political participation

He was referring to the pro-democracy protests of 2014 that paralysed the heart of the city for more than two months.

Earlier in August, three student activists were jailed for leading the movement, prompting a flood of international condemnation.

Over that period, Mr Tang’s health is said to have deteriorated due to liver cancer.

He cannot have been happy about the political division in his beloved city, which he continued to support with many acts of charity.

Recently, I won a copy of his book, Rules of Modern Life, at a charity raffle to which he donated generously.

He had promised to sign it. Sadly, the book will now remain unsigned.