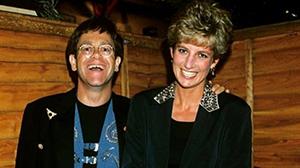 London: Fans of Princess Diana gathered at dawn at the gates of Kensington Palace on Thursday to celebrate the life of a woman who transformed Britain and its royal family when she died 20 years ago in a Paris car crash.

One of the most famous women in the world, Diana was killed aged 36 on August 31, 1997, when her limousine crashed in a tunnel as it sped away from paparazzi giving chase on motorbikes.

Music superstar Elton John also offered a tribute to the late princess, posting an image on social media on Thursday of the pair laughing together and with his hand on her shoulder, and wrote: “20 years ago today, the world lost an angel. #RIP.”

The pop icon memorably performed his moving song Candle In The Wind at Diana’s funeral, a moment in the service many remember for its evocative power. He originally wrote the song in honour of Marilyn Monroe, but reworked it for his friend Diana.

Her death prompted the biggest outpouring of grief seen in Britain in recent times and hurt the monarchy, which was accused of reacting coldly.

The events that followed, when Queen Elizabeth promised to learn from Diana’s life, are regarded as a turning point in the modernisation of the country and how the royal family relates to the public.

“She brought a breath of fresh air to the royal family,” said Caryll Foster, 57, who got to the palace for 3am to mark the time when the news of Diana’s death broke.

“The royal family can be a bit cold, and she was warm hearted and kind. She was very special and we want to keep her memory alive.”

On Thursday, fans gathered in the dark to lay candles and remember a woman who married Prince Charles, the heir to the throne, in a glittering 1981 wedding ceremony before their bitter divorce in 1996.

The 20th anniversary of Diana’s death has prompted a renewed fascination with the “People’s Princess”, as she was dubbed by then-Prime Minister Tony Blair, with her two sons Prince William and Harry leading the tributes.

The front pages of newspapers showed the two royals examining flowers and notes left for their mother, next to the same image taken 20 years ago when, aged 15 and 12, they met mourners and read some of the thousands of messages left at the gates.

In documentaries broadcast in recent weeks, the two men have spoken about the trauma they suffered from their mother’s death and their sense of confusion and bewilderment at the country’s grief.

The Times newspaper said on Thursday the fact the royal princes could speak so openly about their emotions showed the lasting legacy of Diana, one of the first royal figures to talk about her emotions.

“Their courage to be openly vulnerable and to talk about these issues is a mark of how the royal family has changed and an example of the role a modern royal family can play in British life,” it said in an editorial.

“The princes have led the way in dispensing with the stiff upper lip against which Diana railed.”