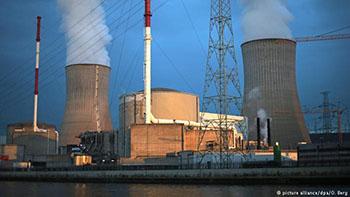 Only 70 kilometers separate Aachen from the Tihange nuclear plant in Belgium. Many residents have long had concerns about the safety of the facility. Now, the city is offering iodine tablets in case of an accident.

People in Aachen often feel uneasy about their proximity to the Belgian border, and the controversial Tihange nuclear power plant located some 70 kilometers (43 miles) away. Parts of the plant are more than 40 years old. The oldest block was meant to be taken offline two years ago. Repeated reports about newly discovered cracks in the reactors send collective shivers through Aachen’s population. Now, local authorities are taking a preventative measure. Starting on Friday, residents can order free iodine tablets online, in the event of a major accident in Tihange.
Usually, iodine tablets are stored in a central location, and only distributed in an emergency. But Markus Kremer, the Aachen city official in charge of environmental issues, said the city came to the conclusion that the tablets couldn’t be distributed quickly enough in the case of an accident at Tihange. “That’s how we had the idea of supplying a large part of the population with iodine tablets in advance,” he saidThe tablets could help prevent thyroid cancer in case of radioactive contamination, and are aimed primarily at children, breastfeeding mothers and people under the age of 45. For all other people, the risk of side effects outweighs the likelihood of one day contracting thyroid cancer.
‘Don’t want to downplay the risks’
Kremer says the city is aware that such a preventative measure could have the unwanted effect of further unsettling Aachen residents. “In everything we’ve done so far, we’ve tried to find a sensible way of communicating the necessary information. On the one hand, there is absolutely no point in people panicking, but we also don’t want to downplay the risks.” Authorities estimate that more than a third of residents will take advantage of the free tablets.
Belgium’s nuclear plants have also mobilized Aachen residents in other ways. Many windows and car bumpers sport stickers and flyers calling for Tihange to be closed down. This summer, activists formed a human chain stretching 90 kilometers along the road from Tihange to Aachen in protest of the power plant.
Local pharmacist Gabriele Neumann said there was already demand for iodine tablets before the city launched its distribution program. “There was particularly large demand around 18 months ago when Tihange was shut down and then restarted a few times,” she said, adding her pharmacy alone sold more than 300 packages of iodine tablets at the time.
Tablets ‘only a first step’
But iodine tablets alone are not nearly enough if citizens seriously want to prepare themselves for a large-scale nuclear accident, said Hans-Josef Allelein, an expert on reactor safety and reactor technology at Aachen’s technical university. “We need to be clear: that’s just a first step. I personally don’t think this fear is founded, but if you have this fear, you should also stockpile two liters of water per person, basic food supplies, vitamin tablets, rubber boots and materials you can use to seal your doors and windows,” said Allelein. But he’s critical of the debate about iodine tablets specifically, and Tihange in general, saying the tone has been too hysterical. And he takes particular issue with a study commissioned on the Aachen region, outlining possible scenarios in the event of a major accident at the plant.
The study, conducted by the Institute for Security and Risk Assessment at the University of Vienna, concluded that in the event of an accident at Tihange, the Aachen region would very likely be affected by radioactive radiation. Furthermore, the study said that, depending on weather patterns, the levels of radioactivity could reach those seen during the 1986 Chernobyl disaster, leading to widespread evacuations.
Government: No basis for conclusions
At the end of last year, Green party lawmaker Sylvia Kotting-Uhl submitted a parliamentary question to the federal government in which she referred to the results of the study from Vienna. The government responded at the start of this year, saying that the study did not adequately describe the disaster and emergency measures, and that it could therefore not be used as the basis for any firm conclusions.
Even though physicist Allelein personally feels that fears about a nuclear disaster at Tihange are unfounded, he does agree with one aspect of the criticism directed at the Belgian operators of the power plant: “I have the feeling that the Belgian operators and also Belgium’s Federal Agency for Nuclear Control only ever release information once it’s somehow been released elsewhere.”