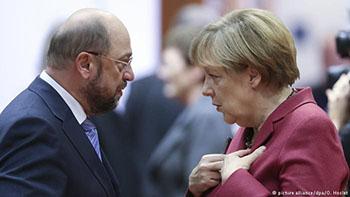 Germany decides in less than a month whether to give German chancellor Angela Merkel one more term. The latest poll puts the CDU ahead – and sees the right-wing AfD as the third largest political force.
The German federal election is reaching its critical stage. On Sunday evening Chancellor Angela Merkel and her main election rival Martin Schulz will face off in a live television debate.

Half of German voters are expected to tune it as the Christian Democratic Union (CDU) chancellor and the challenger from the Social Democratic Party (SPD) go face-to-face over 90-minutes, according to polling institute Forsa.
Many see this as Schulz’s last chance to make a stand in the election.
The chances of that happening, however, appear slim. According to the latest Deutschlandtrend survey, almost two-thirds of voters believe Merkel will emerge triumphant from the debate, while only 17 percent trust Schulz to outperform the chancellor. Merkel even narrowly edges in among SPD voters. Supporters from all the other main parties – the CDU and its Bavarian sister-party, the Christian Social Union (CSU), the free market, liberal Free Democrats (FDP), the Green party, the Alternative for Germany (AfD) and the Left party – also overwhelming see Merkel coming out on top.
Interestingly, the numbers closely reflect the same survey taken ahead of the 2009 television debate, when Merkel went up against the SDP’s Frank-Walter Steinmeier. In 2013, the chancellor went into the debates in a much weaker starting position.
When voters were asked to contrast Merkel and Schulz, the chancellor also maintained her direct advantage. Half of voters polled said they would elect her directly if given the chance, compared to Schulz, for whom only one-in-four would vote. The German chancellor, however, is not directly chosen by voters but elected by parliament.
Three-quarters of SPD voters said they would elect Schulz directly, if possible. The SPD challenger is, naturally, more popular among Left party supporters than Merkel. Perhaps surprisingly, however, that is not the case among the Green party fellowship.
Neither candidate came out of the survey unscathed, however. Schulz’s ratings plummeted to an all-time low, while Merkel’s lead has also dropped by 8 points since reaching an all-time of 57 percent back in July.
Merkel and the liberals
So, which party is Merkel most likely to govern with if she wins a fourth term? According to the Infratest-Dimap polling institute, there’s been a shift in voter opinion since the beginning of the year. Some 7 percent more voters hope to see a coalition made up of the conservative Union parties and the FDP, compared to back in April. Such a coalition is also favored heavily among the party’s own supporter bases, with 77 percent of CDU/CSU and 88 FDP voters saying they would be pleased to return to the coalition the most recently governed Germany from 2009 to 2013.
Approval for a CDU/CSU-FDP coalition has clearly come at the expense of support for a second consecutive grand coalition, which has seen a 7-percent drop in support.
And what about an unprecedented coalition the CDU/CSU and the Green party? Support doesn’t appear to be too strong, with approval numbers down by 5 percent.
Instead, the most-talked about coalition government right now is the possible link-up between the CDU/CSU, the FDP and the Green party, otherwise known as the Jamaica coalition as the parties’ traditional colors are, like the Caribbean nation’s flag, black (CDU), yellow (FDP) and green. According to the Deutschlandtrend survey, 27 percent of voters favorably view such a government.
The exact same percentage of voters would also welcome a left-leaning government made up of the SPD, the Left party and the Greens. But for that to happen, Schulz’s SPD will have to win more seats in the Bundestag than Merkel’s CDU.
In the so-called “Sunday question” – a traditional polling question that always asks which party people would vote for if the election were held the following Sunday – both the CDU/CSU and the FDP saw a 1-point gain in support. While a welcome boost, that wouldn’t be enough for the two parties to form a coalition among themselves, and the SPD could still see a rise in support.
Were the Union parties and SPD to enter into a “grand coalition” once again, it would, according to polls, leave the right-wing populist AfD as the third-largest and main opposition party.
Such a proposition could see the CDU/CSU opt against going into government with the Social Democrats – if only to keep them as the main opposition party. That would carry certain advantages, for example when it comes to appointing committees and parliamentary speakers.
How to explain this surge of support for the AfD? First, the party has launched a major online advertising campaign over social media in the run-up to the election. Second, from the party’s viewpoint, candidate Alice Weidel has hardly made a misstep during the campaign, leaving the provocations to deputy leader Alexander Gauland. Her relatively clean image has also helped to cover up the in-party fighting between Gauland and AfD co-chair Frauke Petry.
Finally, the AfD used the most recent spate of terror attacks in Manchester, London and Barcelona as fuel for its anti-Merkel campaign. The party has also closely followed every step of the chancellor’s campaign tour across Germany and mobilized loud protest groups at every location.