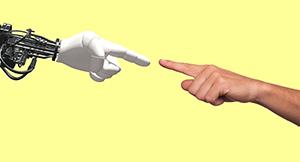 Tomáš Valášek
Much has been written about how artificial intelligence will revolutionize wars. What will it do to international organizations that manage them?