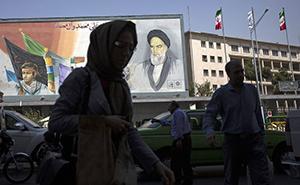 Photographer: Simon Dawson/Bloomberg
Iran stuck by its nuclear deal with world powers by keeping its uranium stockpile and production capacity below set thresholds, according to United Nations inspectors.
Verification of the agreement by the International Atomic Energy Agency, published Thursday in a quarterly report, may come as a surprise to the U.S. administration. President Donald Trump said earlier this month he didn’t consider Iran in compliance and dispatched his UN envoy to convey his concerns.
“Iran has conducted its enrichment activities in line with its long-term enrichment and R&D enrichment plan” agreed with world powers, according to the six-page restricted document published in Vienna.
IAEA inspectors use site visits, remote monitoring, containment seals and satellite imagery to verify that Iran stays within nuclear production and capacity limits agreed with diplomats from China, the European Union, Russia and the U.S. They’ve produced eight reports since January 2016 showing Iran to be in broad compliance with the accord, called the JCPOA.
Iran’s stockpile of 3.7 percent low-enriched uranium stood at 88.4 kilograms (194.9 pounds) as of Aug. 21, below the 300 kilogram limit set by the JCPOA. Its number of operating centrifuges — the fast-spinning machines that separate the uranium-235 isotopes used in fission — was below the limit of 5,060 set by the accord.
UN Ambassador Nikki Haley met IAEA Director General Yukiya Amano on Aug. 23 to convey U.S. concerns over the agreement, which rolled back Iranian nuclear capabilities in exchange for sanctions relief. Other signatories to the deal subsequently voiced their support for the accord.
“The deal with Iran shows the way, the European way to foreign policy,” said European Union foreign policy chief Federica Mogherini, who also chairs the deal’s so-called Joint Commission, its forum to settle conflicts should they arise.
“This was not an agreement between two countries, I have repeated it time and again and I have the impression that we will need to repeat it time and again in the months to come,” she said on Monday. “This is a matter of international security, international safety, and also a matter of credibility of international agreements.”