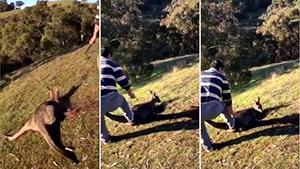 A man has been arrested in Melbourne after a video showing a man slashing at a wounded kangaroo’s throat went viral.

The 43-year-old man was charged with destroying protected wildlife, said authorities in the state of Victoria. Officers also seized knives and firearms from his home, they said.
Environment officials described the incident as “particularly abhorrent”.
If convicted under Victorian law, the man faces up to two years in jail and a fine of A$38,056 (£23,000; $30,000).
The short video clip, shared widely on Chinese messaging app WeChat, starts with a man approaching a wounded kangaroo lying on a hillside.
The kangaroo is seen kicking several times and making noises, so the man eventually approaches it from behind.
He then grabs its tail and steps on its back, before repeatedly cutting its throat with a large hunting knife until the kangaroo stops moving.
People can be heard laughing in the background.
Authorities concerned
“We take all alleged cases of animal cruelty very seriously,” said Glenn Sharp, a spokesman for Victoria’s Department of Environment, Land, Water and Planning.
“The wildlife offences captured in this video are particularly abhorrent.”
He thanked members of the public for coming forward with information.
The man has been granted bail and will appear in court at a later date.