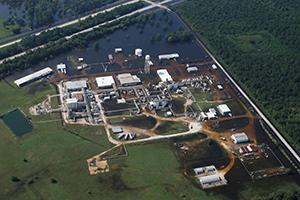 By JULIE TURKEWITZ, HENRY FOUNTAIN and HIROKO TABUCHI- The New York Times
HOUSTON — A series of explosions at a flood-damaged chemical plant outside Houston on Thursday drew sharp focus on hazards to public health and safety from the city’s vast petrochemical complex as the region begins a painstaking recovery from Hurricane Harvey.

The blasts at the plant, owned by the French chemical company Arkema, came after its main electrical system and backups failed, cutting off refrigeration systems that kept volatile chemicals stable. While nearby residents had been evacuated, 15 public safety officers were treated at a hospital after inhaling smoke from chemical fires that followed the explosions.
The Arkema plant has been identified as one of the most hazardous in the state. Its failure followed releases of contaminants from several other area petrochemical plants and systemic breakdowns of water and sewer systems in Houston and elsewhere in the storm-struck region.
The explosions — more are expected, the company said — will bring fresh scrutiny on whether these plants are adequately regulated and monitored by state and federal safety officials.
The chemical plant accident came as devastation from Harvey, now a tropical depression moving into the Mississippi Valley, continued to spread across the region. The known death toll from the storm and flooding remained at 39, the authorities said.
Record-breaking floods swept through Beaumont, Tex., 100 miles east of Houston, damaging the water system and leaving the city’s 120,000 residents without clean water.
Faced with that prospect, one hospital, Baptist Beaumont, began to transport most of its 193 patients to other hospitals outside the city. “We’re doing this before we’re in crisis mode,” a spokeswoman said.
Beaumont city officials said they would not be able to assess the damage to the water system until floodwaters began to recede, and that efforts were being made to distribute bottled water. But Harvey dropped nearly four feet of rain in the area, and most roads into the city remained impassable.
“Right now, Beaumont’s basically on an island,” a police spokeswoman said.
While many areas continued to face the threat of rising waters, and rescues from flooded homes were continuing, many Houston residents began to return home for the first time in nearly a week to assess the damage.
Vice President Mike Pence and several cabinet officials arrived in Corpus Christi, Tex., around midday on Thursday before heading to nearby Rockport to survey the devastation left by the storm, speak with victims and survey the cleanup effort.
“The American people are with you,” Mr. Pence told a crowd gathered outside a Rockport church.
Tom Bossert, the official leading the White House’s response to the disaster, estimated that 100,000 homes in Texas and Louisiana had been damaged or destroyed, and said that President Trump would soon seek billions in aid.
Mr. Bossert said that rescuers would provide aid to the estimated 500,000 undocumented immigrants in the Houston area, and that federal officials would not round up those whose only offense was entering the country illegally. But undocumented immigrants would likely not be eligible for long-term aid, he said, including subsidies to replace damaged housing.
Last week, with the forecast of an approaching hurricane, executives at Arkema decided to shut down the plant in Crosby, about 30 miles northeast of Houston, as a precaution. Most of the 60 workers were sent home on Friday; only a “ride-out” crew of 11 stayed behind.
The flooding brought on by the weekend’s torrential rainfall knocked out electrical power to the plant on Sunday. Backup generators were inundated as well.
The plant produces chemicals that need to be kept cold to avoid becoming unstable and explosive. With refrigeration equipment not functioning, cold-storage warehouses that held the chemicals began to warm.
Fearing that the chemicals might explode, the workers as a last resort transferred them to nine refrigerated trailers on the property. All but one of the refrigeration units on those trailers eventually failed, the company said.
With no way to prevent explosions, the workers abandoned the site late Tuesday.
Company officials said they had been prepared for a major storm, but nothing of the magnitude that hit.
“Certainly we didn’t anticipate having six feet of water in our plant,” Richard Rennard, an Arkema executive, said at a news conference Thursday. “And this is really the issue that led to the incident we are experiencing now.”
M. Sam Mannan, a professor of chemical engineering at Texas A&M University and the author of a study on Texas chemical plants that listed the Arkema plant as one of the most hazardous in the state, said he could understand why company officials did not foresee such extreme flooding.
Still, the dangers of the chemicals they produce should have prompted them to plan for the worst, he said.
“They knew they were dealing with an unstable chemical that they need to keep refrigerated,” he said. “So the question becomes, could they have done something else?”
Arkema was among many chemical companies that fought regulations issued by the Obama administration to tighten safety at facilities nationwide. The rules, which included provisions to require companies to coordinate more closely with emergency responders, were developed after a series of high-profile accidents, including a blast at a fertilizer plant in Texas City, Tex., that killed 15 people in 2013.
But in June the Trump administration delayed enforcement of the regulations until at least early 2019. That followed lobbying against the rules by the chemicals industry, including Arkema, which argued that they were too costly and would jeopardize trade secrets.
Amy Graham, a spokeswoman for the Environmental Protection Agency, said in an email that the original risk management plan remained in effect. “The agency’s recent action to delay the effectiveness of the 2017 Amendments had no effect on the major safety requirements that applied to the Arkema Crosby plant at the time of the fire,” she said.
The chemicals produced at the Arkema plant, called organic peroxides, present high risks because of their vulnerability to heat.
But the plant is far from alone in its hazards. There are at least three others in the region that produce the same chemicals, and 500 or more other facilities, big and small, that churn out a dizzying array of compounds. Many are hazardous.

“They make everything here,” said Ed Hirs, an energy expert at the University of Houston. “Some of them make comparatively benign things. Other make really nasty things.”
The plants all face challenges now. Most, like the Arkema plant, were shut down protectively before Harvey hit, and have remained closed because of high water. Some have reported damage from the storm, like sinking tank roofs and loss of power, which have led to the release of millions of pounds of hazardous chemicals into the air over the past week.
There will be more challenges in the coming weeks and months as the floodwaters recede and closed facilities are made operational again. Some equipment might not be in safe condition, experts said.
The U.S. Chemical Safety and Hazard Investigation Board, an independent federal agency, has issued a notice detailing precautions that should be taken as plants are restarted. The process is complex, the board said, “because numerous activities are occurring simultaneously and many automatic systems are run under manual control.”
The organic peroxides made at the Arkema plant, which employs about 60 people, are used as catalysts in plastic manufacturing. The Texas A&M study said that the plant held up to half a million pounds of one the chemicals, cumene hydroperoxide.
The explosions occurred at about 2 a.m. local time Thursday in two of the storage trailers, sending black smoke into the air as the material burned. The company said that with no refrigeration in six other trailers, those would likely explode soon as well.

A fire burned at the Arkema plant in Crosby, Tex. More explosions were expected as temperatures rose in trailers where the refrigeration has failed. Credit Adrees Latif/Reuters
Mr. Rennard, the Arkema executive, said that the smoke produced by the blasts and fires was “noxious” and irritating to the eyes, lungs and possibly skin. Residents within a mile and a half of the plant remained under a mandatory evacuation order.
Mr. Rennard said that workers would not enter the site until the floodwaters had receded significantly.
The E.P.A. said that airborne measurements taken at the scene Thursday showed no immediate health threats.
“E.P.A. has emergency response personnel on the scene and the agency is currently reviewing data received from an aircraft that surveyed the scene,” Scott Pruitt, the agency’s administrator, said in a statement.
The Obama-era rules would not necessarily have prevented the explosions, and peroxide itself is not on the list of chemicals the regulations cover. But the plant previously disclosed that it stores two other chemicals, sulfur dioxide and isobutylene, that are covered by the rules.
In pushing back against them, Arkema said it was worried about security. “We have significant concerns with providing security-sensitive information where disclosure of such information could create a risk to our sites and to the communities surrounding them,” Susan Lee-Martin, an Arkema engineer, wrote in a letter to the Environmental Protection Agency in March 2016.
Those rules — which would require companies to undergo third-party audits of their safety measures, make more information available to emergency responders and study more effective ways to keep hazards in check — could help make future accidents less likely, said Gordon Sommers, an attorney at the environmental group Earthjustice.
One critical upgrade at chemical plants that might have been spurred by the new rules would have been developing better backup power systems that could withstand flooding and other disasters, Mr. Sommers said.
“It’s a very good illustration of why rules are important,” he added. “It’s certainly not the last hurricane Texas is going to face. It’s not the last time there’s going to be accidents at chemical plants.”
The Arkema plant has faced regulatory scrutiny in the past, paying some $1.2 million in fines for workplace safety, health, environmental and other violations since 2010, according to Violation Tracker. The plant has been in violation of the Clean Water Act for six out of the past 12 quarters, E.P.A. records show.
The plant has also faced state penalties, including two for improper storage of organic peroxides. In one instance, in 2006, the improper storage led to a fire that released 3,200 pounds of volatile organic compounds and other pollutants into the air.
Julie Turkewitz reported from Houston, and Henry Fountain and Hiroko Tabuchi from New York. Reporting was contributed by Richard Pérez-Peña, Niraj Chokshi and Jonah Engel Bromwich from New York; Lisa Friedman from Washington; and Rick Rojas from Beaumont, Tex.