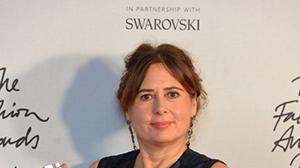 Annie Brown
Quick, think of a way that you’d like your body to be described. Was it “cosy and comfortably shaped”?

Perhaps you’d rather your body not be described at all?
In any case, this is what BBC Radio 4 host John Humphrys has decreed to be an ideal sort in his strangely combative interview with former British Vogue editor Alexandra Shulman on the Today programme.
Fashion is “far more about what you wear and about your style than it is about your body,” says former Vogue editor @AShulman2 #r4today pic.twitter.com/xqr5V0wh02
— BBC Radio 4 Today (@BBCr4today) August 31, 2017
In what was intended to be a far-ranging chat on the fashion industry and how it has changed, it quickly became – as Twitter noted – a case of Humphrys “mansplaining” to the veteran editor how fashion was “cruel” to women and how it dictated ideals to women (perhaps in rather the same way that an older man is dictating how a young women should be shaped, yes?).
Exasperating to listen to Humpreys talk & share outdated&arrogant views. @AShulman2 much more interesting to hear speak – way more in tune
— Hannah Jilani (@JilaniHannah) August 31, 2017
The temerity of John Humphrys mansplaining fashion & women’s bodies to Alexandra Shulman of all people ? @BBCRadio4 #mansplaining https://t.co/P8gwBCRPSL
— Jaclyn (@jdunstan) August 31, 2017
John Humphrys on the Today Show mansplaining how teenage girls are influenced by fashion right now – so off base it hurts. #r4today
— Emily Burt (@EmilyPBurt) August 31, 2017
Humphrys continued to interject when Shulman spoke about how body ideals have changed, in which she noted the huge influence of the likes of Rihanna and Beyonce, with statements like “an awful lot of young girls want to be like models” and how women now also “want to be skinny as a rake”.
As Shulman noted, there is a difference between the models on the runway and what women want to look like and the clothes they want to wear. Yes, designers want models to be thin because they are literally clothes hangers. Yes, the fashion industry has much to answer for when it comes to body image and diversity. Just last month Naomi Campbell criticised the lack of diversity among the staff that worked under Shulman at Vogue. Something that the new editor, Edward Enninful, both the first man to helm the title and also the first person of colour to edit Vogue in the magazine’s 100-year history, will have his work cut out to address.
Humphrys also reached into the usual bag of tricks when it comes to insulting women who love fashion – pointing to British Prime Minister Theresa May’s reputation as a clothes horse with the implication that it was trifling, and pondering why women torture themselves wearing high heels.
To which Shulman noted that May, a woman fond of leather trousers and good shoes, was not having an influence on fashion. Her impact was highlighting that yes, a woman can love clothes – care about them deeply – and still be a serious, powerful person.
May, said Shulman, unpacks the idea that to “be seen to be interested in fashion [there is] something lightweight about you.”
And after quipping “very down on fashion, John”, pointed out that women wear high heels for a lot of reasons.
Or they don’t – it’s never been such a great time to wear flats, with loafers, slides, flatforms the uniform of just about every fashion girl around.
But choosing to wear high heels – because they give height, or a sense of power, or because you just really fancy wearing them isn’t a dictate from fashion. Not to equate feminism with only being about personal choice (and heels are wrapped up in ideals of femininity) but wearing high heels kind of is a personal choice. Though as Melania Trump made clear this week, not one that comes without baggage.
Humphry’s dictates about fashion are simplistic, dated and also insulting – to Shulman’s long career as a fashion gatekeeper and to women who enjoy clothes.
For women might buy fashion magazines, but that doesn’t mean they’re buying into the idea that we all must think, look and dress the same.