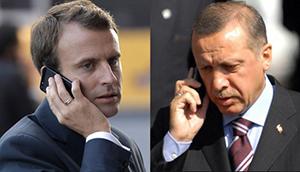 By TM
French President Emmanuel Macron has said being a world leader is not as “cool” as it seems and cited having to speak with Turkish President Recep Tayyip Erdoğan every 10 days as an example, Reuters reported on Wednesday.

Macron’s remarks came during an interview with Le Point magazine, which asked if Macron was aiming to be “cool” on the global stage.

“The global stage is not really a ’cool’ scene, you know. … I am the one who has to talk with Erdogan every 10 days,” said Macron.

While Macron did not comment on it any further, an aide later said that Macron was referring to the serious nature of the conversations with Erdoğan.

Macron has phoned Erdogan again several times to demand the immediate release of French journalist Loup Bureau, who was arrested on Aug. 1 in the southeastern Turkish province of Şırnak on charges of aiding and supporting a terrorist organization.

Turkey has often been criticized by EU members due to Erdoğan’s crackdown on opponents, including journalists and human rights defenders, in the wake of a botched coup attempt last year. Erdoğan increased his presidential powers after a referendum in April, claiming that it is necessary to protect Turkey’s security from its domestic and foreign enemies, raising fears about Turkey’s commitment to the rule of law and human rights.