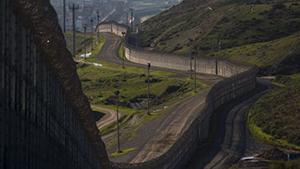 The four concrete prototypes will be 30ft (9m) long and up to 30ft tall, and will be built in the coming months.
Officials will then spend up to two months testing the walls for tampering and penetration resistance using small hand tools, CBP said.
The four contracts are worth up to $500,000 (£387,000) each.
A continuous wall across the entire southern US border was a key promise in President Trump’s election campaign.
The prototypes “will help us refine the design standards” of the eventual wall, acting CBP deputy commissioner Ronald Vitiello said.
“Testing will look at things like the aesthetics of it, how penetrable they are, how resistant they are to tampering, and scaling or anti-claim features.”
But he said the officials would stick to small hand tools rather than testing “ballistic kind of things”.
The walls will also need to feature cable conduits and other design features for sensors and cameras.
Once the order to start building is given in the next few weeks, the prototypes are expected to be finished within 30 days.
The four companies to which the contracts were awarded are:
• Caddell Construction, in Montgomery, Alabama
• Fisher Industries in Tempe, Arizona
• Texas Sterling Construction in Houston, Texas
• WG Yates & Sons Construction in Philadelphia, Mississippi
Mr Vitiello said he did not know if any of the firms had had prior experience in border wall construction.
More than 200 companies are believed to have submitted designs for the proposed border wall.
Four more contracts for prototypes made from materials other than concrete will be announced next week.