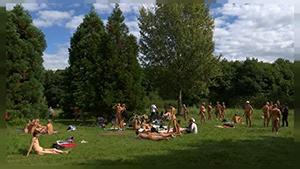 Paris’ first nudist park opened on Thursday (August 31). Located in the Bois de Vincennes, in the eastern part of the city, the site is still under a trial phase. It will remain available to the public free of charge until October 15th, from 8.00 am to 7.30 pm.

The space is located next to a bird reserve. To avoid any confusion, warning signs have been placed on the path leading to the clearing, alerting passersby that they are approaching a nudist section.
More than 2.5 million people practice nudism in France. The country has 400 naturist public sites and a nudist open spot in its capital has been longed for.
The Paris Nudist Association celebrates the opening and hopes spaces like these will remove the taboos attributed to this practice.
Spokesperson Julien Penegry said: “Nudism is not only a summer thing taking place on beaches during summer. It’s an everyday thing. It is a way of life, with values. So, people who don’t know this way of life and see in nudism something shocking, shameful or disrespectful should see the things in a different way, because nudity is nothing shameful”.
The Paris mayor’s office has stated that this inauguration is “part of an open-minded vision for the use of Parisian public spaces”.