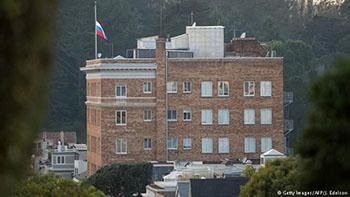 Andrew Osborn
MOSCOW (Reuters) – Russia said on Friday it would respond harshly to any U.S. measures designed to hurt it, a day after the United States told Moscow to close its San Francisco consulate and buildings in Washington and New York.

The warning, from Foreign Minister Sergei Lavrov, came as Russia said it was weighing a response to the U.S. move that will force it to shutter two trade missions in the United States as well as the San Francisco consulate by Sept. 2.
“We’ll react as soon as we finish our analysis,” Lavrov told students in Moscow. “We will respond harshly to things that damage us.”
Separately, a top Kremlin aide complained the U.S. demarche pushed bilateral ties further into a blind alley and fuelled a spiral of tit-for-tat retaliatory measures.
U.S. President Donald Trump took office in January, saying he wanted to improve U.S.-Russia ties which were at a post-Cold War low. But since then, ties have frayed further after U.S. intelligence officials said Russia had meddled in the presidential election, something Moscow denies.
Trump, himself battling allegations his associates colluded with Russia, grudgingly signed new sanctions on Moscow into law this month which had been drawn up by Congress.
When it became clear those measures would become law, Moscow ordered the United States to cut its diplomatic and technical staff in Russia by more than half, to 455 people.
An unidentified woman enters a gate at the side entrance to the building of the Consulate General of Russia in San Francisco, California, U.S., August 31, 2017. REUTERS/Stephen Lam
Lavrov hinted on Friday that Russia might look at ordering further reductions in U.S. embassy staff, suggesting Moscow had been generous last time by allowing Washington to keep “more than 150” extra people.
He said Russia had cut the U.S. numbers to tally with the number of Russian diplomats in the United States, but that Moscow had generously included more than 150 Russian staff who work at Russia’s representation office at the United Nations.
Lavrov said Moscow still hoped for better relations and blamed Trump’s political foes for the deteriorating situation.
“I want to say that this whole story with exchanging tit-for-tat sanctions was not started by us,” Lavrov said.
“It was started by the Obama administration to undermine U.S.-Russia relations and to not allow Trump to advance constructive ideas or fulfil his pre-election pledges.”
Barack Obama, then outgoing president, expelled 35 suspected Russian spies in December and seized two Russian diplomatic compounds. President Vladimir Putin paused before responding, saying he would wait to see how Trump handled Russia.
“We thought this administration could exercise common sense, but unfortunately the Russophobes in Congress are not allowing it to,” said Lavrov, who complained that the United States had only given Moscow 48 hours to comply with its latest demands.
Additional reporting by Denis Pinchuk; Editing by Robin Pomeroy