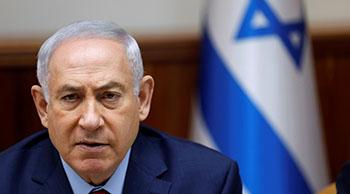 Israeli Prime Minister Netanyahu is pushing the panic button over the collapse of the Saudi-Israeli jihadist proxies in Syria and now threatening to launch a major air war, as ex-British diplomat Alastair Crooke describes.
By Alastair Crooke

“In more traditional bastions of support for Israel, Netanyahu took a calculated gamble — would enough American Jewish support continue to stand with an increasingly illiberal and ethno-nationalist Israel, thereby facilitating the perpetuation of the lopsided U.S.-Israel relationship? Netanyahu bet yes, and he was right.”
And here is another interesting point that Levy makes:
“And then events took a further turn in Netanyahu’s favor with the rise to power in the United States and parts of Central Eastern Europe (and to enhanced prominence elsewhere in Europe and the West) of the very ethno-nationalist trend to which Netanyahu is so committed, working to replace liberal with illiberal democracy. One should not underestimate Israel and Netanyahu’s importance as an ideological and practical avant-garde for this trend.”
Former U.S. Ambassador and respected political analyst Chas Freeman wrote recently very bluntly: “the central objective of U.S. policy in the Middle East has long been to achieve regional acceptance for the Jewish-settler state in Palestine.” Or, in other words, for Washington, its Middle East policy – and all its actions – have been determined by “to be, or not to be”: “To be” (that is) – with Israel, or not “to be” (with Israel).
Israel’s Lost Ground
The key point now is that the region has just made a seismic shift into the “not to be” camp. Is there much that America can do about that? Israel very much is alone with only a weakened Saudi Arabia at its side, and there are clear limits to what Saudi Arabia can do.
The U.S. calling on Arab states to engage more with Iraqi Prime Minister Haider al-Abadi seems somehow inadequate. Iran is not looking for war with Israel (as a number of Israeli analysts have acknowledged); but, too, the Syrian President has made clear that his government intends to recover “all Syria” – and all Syria includes the occupied Golan Heights. And this week, Hassan Nasrallah called on the Lebanese government “to devise a plan and take a sovereign decision to liberate the Shebaa Farms and the Kfarshouba Hills” from Israel.
A number Israeli commentators already are saying that the “writing is on the wall” – and that it would be better for Israel to cede territory unilaterally, rather than risk the loss of hundreds of lives of Israeli servicemen in a futile attempt to retain it. That, though, seems hardly congruent with the Israeli Prime Minister’s “not an inch, will we yield” character and recent statements.
Will ethno-nationalism provide Israel with a new support base? Well, firstly, I do not see Israel’s doctrine as “illiberal democracy,” but rather an apartheid system intended to subordinate Palestinian political rights. And as the political schism in the West widens, with one “wing” seeking to delegitimize the other by tarnishing them as racists, bigots and Nazis, it is clear that the real America First-ers will try, at any price, to distance themselves from the extremists.
Daniel Levy points out that the Alt-Right leader, Richard Spencer, depicts his movement as White Zionism. Is this really likely to build support for Israel? How long before the “globalists” use precisely Netanyahu’s “illiberal democracy” meme to taunt the U.S. Right that this is precisely the kind of society for which they too aim: with Mexicans and black Americans treated like Palestinians?
‘Ethnic Nationalism’
The increasingly “not to be” constituency of the Middle East has a simpler word for Netanyahu’s “ethnic nationalism.” They call it simply Western colonialism. Round one of Chas Freeman’s making the Middle East “be with Israel” consisted of the shock-and-awe assault on Iraq. Iraq is now allied with Iran, and the Hashad militia (PMU) are becoming a widely mobilized fighting force. The second stage was 2006. Today, Hizbullah is a regional force, and not a just Lebanese one.
The third strike was at Syria. Today, Syria is allied with Russia, Iran, Hizbullah and Iraq. What will comprise the next round in the “to be, or not to be” war?
For all Netanyahu’s bluster about Israel standing stronger, and having beaten back “what he had called the ‘fake-news claim’ that without a deal with the Palestinians ‘Israel will be isolated, weakened and abandoned’ facing a ‘diplomatic tsunami,’” Netanyahu may have just discovered, in these last two weeks, that he confused facing down the weakened Palestinians with “victory” — only at the very moment of his apparent triumph, to find himself alone in a new, “New Middle East.”
Perhaps Pravda was right, and Netanyahu did appear close to panic, during his hurriedly arranged, and urgently called, Sochi summit.
[For more on this topic, see Consortiumnews.com’s “The Possible Education of Donald Trump.”]
Alastair Crooke is a former British diplomat who was a senior figure in British intelligence and in European Union diplomacy. He is the founder and director of the Conflicts Forum.