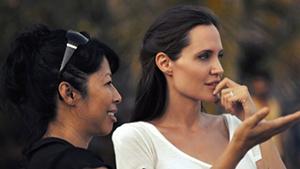 Jenny Cooney Carrillo
Seventeen years ago, Angelina Jolie and Cambodian author Loung Ung were sitting in hammocks, waiting out a torrential monsoon in a remote part of Cambodia, when Jolie asked a question that would change her life.

“I asked Loung how she would feel – as a Cambodian orphan herself – if I adopted a Cambodian orphan,” she says, with emotion in her voice. “I’ll always be grateful she was really supportive, because if she had said the opposite, my life would have been very different and I might never have found Maddox.”

The two women – now close friends – met at that time because Jolie had been to Cambodia to film her first movie blockbuster, Lara Croft: Tomb Raider, and in her efforts to get to know the country better had picked up a copy of Loung’s book First They Killed My Father. It documents her story as a five-year-old girl struggling to survive the genocide of the Khmer Rouge regime responsible for the deaths of an estimated 2 million people.

Loung also vividly remembers that night in their hammocks, when Jolie asked for her blessing. “All I saw was that her heart was big and her desire to be a mother was real and her wanting to mother a child from Cambodia was authentic,” Loung says.

“I actually wanted her to adopt me as an orphan but, being that I’m older than her, I couldn’t really suggest that.”

Loung’s book has now been adapted into a film, directed by Jolie. The made-for-Netflix movie – released on September 15 – is shot in the native Khmer language and begins in 1975, when the five-year-old Loung Ung and her six siblings are living a privileged life in Phnom Penh as the children of a high-ranking government official. Their world is turned upside down when Pol Pot’s Khmer Rouge regime storms into the city and forces everyone to evacuate, killing those who resist and sending the rest to work camps during what became a four-year nightmare.

Jolie and Loung have talked about turning Loung’s story into a film since Jolie adopted Maddox, now 16.

“Loung has known Mad his whole life and Mad has known of Loung’s story his whole life and it was Maddox who finally said, ‘It’s time, let’s go make the movie,’ ” Jolie says. She acknowledges her son’s contribution in the end credits as an executive producer. “I think we were both waiting for him to be ready because I’d told him when it was time he would have to really be there, and I was proud of him for how he immersed himself in the experience.

“He’s my son but he belongs very much also to Cambodia, so it was nice to see him at home.”

On this day, Jolie is in a hotel suite in Beverly Hills, California, to discuss the film and is doing her best to look calm and confident. The bright red lipstick on the Oscar winner’s famously bee-stung lips draws attention away from her eyes, which look as if they could fill with tears at any moment. She is eager to talk about her passion project but knows there is an elephant in the room – her split with Brad Pitt. Their 12-year relationship (and two-year marriage) ended reportedly due to Pitt’s alcohol issues and a well-documented blow-up with Maddox on the tarmac during an airport stopover. Jolie filed for divorce in September last year – requesting full custody of their six children, aged nine to 16. Pitt recently told GQ magazine he had been sober for six months. How is she? “I’m OK. It’s hard,” she says softly. “I am a little shy at this time, because I am not as strong I think inside as I have been in the past.”

Jolie, 42, is uncharacteristically cautious when asked how she has handled the past year. “It’s been difficult and I haven’t worked, other than teaching and focusing on my work in Nairobi [involving a June visit to mark World Refugee Day]. I’ve actually spent most of my days just taking care of the children,” she says, her voice cracking. “I will eventually balance more and do more work but because of family issues it’s been extremely tough.

“It’s not easy doing press right now … I can’t pretend this isn’t a tough time in my life, but I’m trying to get through it by just moving forward and knowing it’s part of being human. Sometimes I can forget that and we can all get pretty hard on each other … Maybe sometimes it appears I am pulling it all together, but really in fact I am just trying to get through my days.”

Jolie also tears up when she talks about her awakening as a humanitarian after her first visit to Cambodia and what that country means to her.

“Going there the first time helped me realise how little I knew about the world and opened my eyes to camps and refugees and the landmine issue,” she says. “But I also became a mother through Cambodia, when I found Maddox, and I’ve been a citizen for over a decade and we have our home in the north, near the Thai border, so making this film brought everything I love into one place.”

“What I’ve learned from my own kids is that you really can’t tell them what to do,” she laughs. “She showed up every day and surprised me.” As for claims that the film’s casting team used exploitative methods during auditions involving giving and taking away money in a “game”, Jolie has called the allegations “false and upsetting”.

She says of Sareum: “I asked her if she wanted to be an actress and she said, ‘no, I want to be a director.’ She’s obviously learnt very quickly!”

Loung later joins Jolie in a joint interview and they appear close, giggling and whispering as if we are talking about someone else who suffered the trauma that is depicted in the film. Loung’s parents, two sisters and 20 other relatives (the title of the film is the plot spoiler) were killed during the Khmer Rouge reign. In 1980, Loung and her older brother Meng escaped by boat to Thailand, where they spent five months in a refugee camp before moving to the US to live with a host family in Vermont. Loung returns to Cambodia frequently for her non-profit work and has been reunited with her surviving siblings, pictured with her in a moving cameo in the film’s final scene.

“I don’t see it as a story about horror or war but a story about love,” Loung says. “I think it’s a story about resilience; about a child and a family and a country going through a genocide but it also shows how love, as broken as it was, inspired us all to survive.”

Jolie is less guarded when asked about her ongoing struggle with her health, after opting to have a preventive double mastectomy in 2013 – sending her into early menopause – and more recently being treated for hypertension and Bell’s palsy.

“Yes, my body has sometimes taken a hit with all of the things that I had to do,” she says matter-of-factly. “And then, emotionally, it was a difficult year on top of all that. But I don’t want my children to feel my stress; they need to feel my joy and have joy in just living every day. I see them together and it gives me great peace to know that the day I pass away, they will have each other and take care of each other for life.”

Her tone turns lighter when asked where she’d like to be in 10 years. “I guess all my kids will be off on their own and I’ll be visiting them and chasing them around, but I hope I’m not a grandmother yet!”

She shudders at what she put her parents through as a wild teenager. “Now I have them, I know there are many complications that come with it. But I am just hoping that nobody will ever be as difficult as I was – and so far they are not.”

Having watched this former wild child of Hollywood evolve into a devoted mother and humanitarian, you have to wonder what the next chapter of her life will look like.

“Maybe watching my kids growing up makes me start to realise my own sense of play and joy has been put on hold a little bit,” Jolie says. “Maybe them hitting their teens is going to bring out a little more fun in mum. Maybe I’m going back; maybe it’s time.”

First They Killed My Father is released on September 15 on Netflix.
CAMBODIA ON FILM

Year Zero: The Silent Death of Cambodia (1979) The acclaimed documentary by Australian journalist John Pilger recounts the atrocities faced by the Cambodian people under the Khmer Rouge. Viewers were so affected at the time, they donated more than $A73 million in aid to the country.

The Killing Fields (1985) The only major studio film about the genocide earned seven Oscar nominations and won three, including best supporting actor Haing Ngor. The film, based on the book by journalist Sydney Schanberg, documents the experiences of the New York Times reporter (Sam Waterston) in Cambodia as the Khmer Rouge seized power and the relationship he formed with his Khmer counterpart, Dith Pran (Ngor).

Lara Croft: Tomb Raider (2001) In the action adventure film that brought Angelina Jolie to Cambodia for the first time, she plays video game adventuress Lara Croft come to life as she races against time and villains to recover powerful ancient artefacts. The film also boosted tourism by shooting on locations including the Angkor Wat temple area and nearby town of Siem Reap.

Wish You Were Here (2012) The Australian film, directed by Kieran Darcy-Smith, features four friends who lose themselves in a carefree Cambodian holiday but only three come home. Teresa Palmer and Joel Edgerton star in the chilling drama that tries to unravel what happened one night under the full moon in Cambodia.

The Cambodian Space Project: Not Easy Rock’n’Roll (2015) It’s strange to think that Beatlemania hit Cambodia in the ’60s and ’70s but this documentary recounts a time when Khmer crowds were also big contemporary music fans – until the Khmer Rouge rose to power and all intellectuals, including musicians, were murdered. The film painstakingly documents what remains of the Cambodian pop scene.