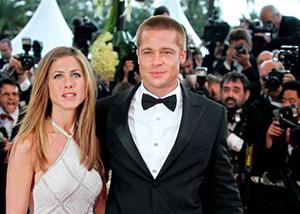 Independent.ie Newsdesk
Brad Pitt has reportedly apologised to his ex-wife Jennifer Aniston, more than a decade after their 2005 marriage break-up.

According to US magazine In Touch, the actor (52) has offered an apology to his ex-wife for the way he treated her in the aftermath of their split.
The actor recently ended his marriage with his Mrs & Mrs Smith costar Angelina Jolie, with whom he has six children.
“He’s been determined to apologise for everything he put her through and that’s exactly what he did. It was the most intimate conversation Brad and Jen have ever had.”
“He apologised to Jen for being an absentee husband, for being stoned and bored. He also made amends for leaving her for Angelina,” the source said.
Aniston wed actor and screenwriter Justin Theroux in 2015.
Meanwhile, Pitt admitted earlier this year that he was “boozing too much” in the months before his split from Angelina Jolie, and has turned to therapy to help him through.
The Hollywood star also said he slept on the floor of a friend’s house for six weeks after his wife filed for divorce, because he could not bear to be in their family home.
In his first interview since the separation, Pitt told GQ Style he was a “professional” drinker, saying: “I can’t remember a day since I got out of college when I wasn’t boozing or had a spliff, or something … I mean, I stopped everything except boozing when I started my family.
“But even this last year, you know – things I wasn’t dealing with. I was boozing too much. It’s just become a problem.
“And I’m really happy, it’s been half a year now, which is bittersweet, but I’ve got my feelings in my fingertips again.”
He continued: “I enjoy wine very, very much, but I just ran it to the ground. I had to step away for a minute. And truthfully I could drink a Russian under the table with his own vodka. I was a professional. I was good.”
Pitt, who has six children with Jolie, admitted that he had “hit the lottery” but let it go to waste, and is now finding comfort in therapy.
He said: “I just started therapy. I love it, I love it. I went through two therapists to get to the right one.”
He added: “For me this period has really been about looking at my weaknesses and failures and owning my side of the street. I’m an asshole when it comes to this need for justice … It’s such a silly idea, the idea that the world is fair.
“And this is coming from a guy who hit the lottery, I’m well aware of that. I hit the lottery, and I still would waste my time on those hollow pursuits.”
After Angelina filed for divorce, Brad could not even bear to be in their house in the Hollywood Hills, saying: “It was too sad to be here at first, so I went and stayed on a friend’s floor, a little bungalow in Santa Monica.
“I crashed over here a little bit, my friend (David) Fincher lives right here. He’s always going to have an open door for me, and I was doing a lot of stuff on the Westside, so I stayed at my friend’s house on the floor for a month and a half.”
When asked if the split was like grieving a death, Pitt replied: “Yeah,” before adding that it has made him want to be a better father.
He said: “It’s hit me smack in the face with our divorce: I gotta be more. I gotta be more for them. I have to show them. And I haven’t been great at it.”
Pitt faced an FBI probe into an alleged altercation between him and his 15-year-old adopted son Maddox on a private plane, which happened just days before Jolie filed for divorce in September.
The investigation was closed in November, with Pitt facing no charges over the incident.
Online Editors