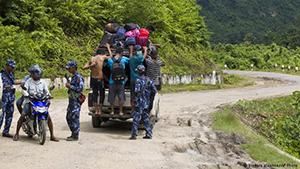 Within 24 hours, roughly 20,000 Rohingya have fled Myanmar for Bangladesh, according to UN sources. Rights groups have urged the Burmese government to allow monitors into affected areas to “uncover what’s going on.”

The Office of the UN High Commissioner for Refugee (UNHCR) on Saturday said tens of thousands of Rohingya arrived in Bangladesh over the past 24 hours, fleeing violence in neighboring Myanmar.
“Roughly 60,000 have arrived in Bangladesh since the violence erupted on August 25,” said UNHCR spokeswoman Vivian Tan, roughly 20,000 more than local officials’ estimated on Friday.
Since August 25, Myanmar has witnessed the worst sectarian violence in years, with Burmese security forces and Muslim minority Rohingya militants accusing each other of burning down villages and staging mass killings.
Nearly 400 people have been killed, the majority of them insurgents, according to defense officials. The Burmese military has blamed militants for setting fire to thousands of houses in the western state.
However, testimonies from Rohingya refugees in Bangladesh have implicated Burmese security forces for torching villages and mass killings. In Myanmar, Rohingya are treated as “ethnic residents” and are often denied citizenship.
‘Far worse than originally thought’
Human Rights Watch (HRW) on Saturday called on Myanmar to allow independent monitors into affected areas to ensure accountability with regards to the violence.
“This new satellite imagery shows the total destruction of a Muslim village, and prompts serious concerns that the level of devastation in northern Rakhine State may be far worse than originally thought,” said Phil Robertson, HRW’s deputy Asia director.
“Yet this is only one of 17 sites that we’ve located where burnings have taken place. Independent monitors are needed on the group urgently to uncover what’s going on.”
Since the violence erupted, humanitarian aid and food security agencies have shuttered their operations in Rakhine, including the World Food Program. UN Secretary General Antonio Guterres on Friday warned of a growing “humanitarian catastrophe” if the Burmese government continued to deny aid workers access to affected areas.