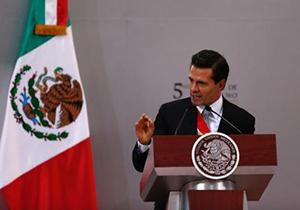 The 2014 reforms wrung control of the country’s oil and gas sector from state hands, opening it up to private investment, and incorporating them into the 23-year-old NAFTA is seen as a way to help preserve them for the long term.
“We’re working in this sense, analyzing all of the elements that need to be included in the energy discussion to reflect the reform Mexico established,” Mexico’s chief trade negotiator, Kenneth Smith, said on Saturday after a bargaining session in the second round of NAFTA modernization talks.
Smith, speaking to reporters as he walked side-by-side with his counterparts John Melle of the United States and Steve Verheul of Canada, added that negotiators would “look for mechanisms that allow us to integrate ourselves in a positive way in the energy sector.”
Trade negotiators from the three nations are working through the weekend in Mexico City to present more proposals to revamp NAFTA, an accord that underpins more than $1.2 trillion in annual cross-border trade.
When NAFTA was enacted in 1994, Mexico’s energy sector was closed and Pena Nieto’s reforms ended a decades-long monopoly for national oil company Pemex [PEMX.UL] and ensured competitive oil auctions. Incorporating them into NAFTA would help shield them from any future governments that may want to reverse them.
Trade experts both in the United States and Mexico have said that increasing energy trade and investments through NAFTA would help reduce the $64 billion U.S. trade deficit with Mexico that irritates U.S. President Donald Trump, partly through increased U.S. gas and oilfield equipment sales to Mexico.
PENA NIETO STRIKES BACK AT TRUMP‘S SWIPES
Trump has repeatedly threatened to rip up NAFTA, warning he could do so again just this week.
Pena Nieto, in his annual address to the nation on Saturday, defended free trade and young migrants in the United States, saying his government would not accept insults against “national dignity” from Trump’s administration.
“The relationship with the new government of the United States, like any other nation, must be based on irrevocable principles: sovereignty, defense of the national interest and protection of our migrants,” Pena Nieto said.
“We will not accept anything that goes against our national dignity,” he told a crowd of politicians and the country’s elite, who rose at that point to deliver the most vigorous standing ovation of his address.
Trump this week also insisted again that Mexico would eventually pay for his proposed wall on the southern U.S. border to block the flow of illegal immigrants and drugs.
Pena Nieto shied away from mentioning the wall but said Mexico would promote the recognition of migrants for their contributions and reject discrimination against them.
Pena Nieto also said Mexico would continue to defend NAFTA as a vehicle to further integrate the region.
“The negotiating team has precise instructions to participate in this process with seriousness, good faith and a constructive spirit,” he said, “always putting first the interest of Mexico while reaching for a result where all three countries win.”
Trump has repeatedly threatened to pull out of NAFTA if talks do not go his way and on Saturday said he would discuss next week with his advisers whether to withdraw from a trade deal with South Korea that he has also long criticized.
Top Mexican officials said Latin America’s No. 2 economy would walk away from negotiations if Trump moves to withdraw from the deal.
Negotiators were going to take until Monday to get to one of the thorniest issues, U.S. demands for increased North American and U.S. content for autos and other manufactured goods, according to a schedule seen by Reuters.
Mexico’s Smith said no specific proposals had been put on the table by U.S. negotiators regarding rules of origin.
Additional reporting by Adriana Barrera and David Lawder; Writing by David Lawder and Michael O’Boyle; Editing by Lisa Von Ahn and Bill Trott
Our Standards:The Thomson Reuters Trust Principles.