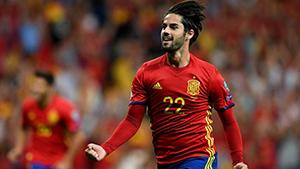 Spain are a Sky Bet Price Boost at 9/1 to win the World Cup after they struck a potentially-decisive blow in the battle for top spot in their qualifying group by sweeping aside Italy 3-0 in Madrid.

Two goals from Real Madrid’s Isco, the first a glorious right-footed free-kick into the top corner after 13 minutes and the second a crisp left-footed shot into the bottom corner from the edge of the area after 40, set the hosts on their way.

A close-range finish from Chelsea striker Alvaro Morata in the 77th minute completed a comprehensive win and lifted Spain three points clear of their opponents at the top of Group G.

The two sides came into the clash with identical records of five wins and one draw – in the reverse fixture last October – but Julen Lopetegui’s men emerged as the overwhelming favourites to book an automatic spot at next summer’s tournament in Russia.

They have games against Lichtenstein, Albania and Israel to come.

Italy look comfortable in second spot, with a four-point lead over Albania following the latter’s 2-0 home win over Lichtenstein courtesy of second-half goals from Odise Roshi and Ansi Agolli.

Lower down the group, Israel slumped to a shock 1-0 home defeat to Macedonia, Goran Pandev with the 73rd-minute winner.

Serbia moved two points clear of the Republic of Ireland at the top of Group D thanks to a routine 3-0 home victory over bottom side Moldova.

Newcastle’s Aleksandar Mitrovic wrapped up the win 10 minutes from time as Serbia took full advantage of the Republic dropping points in Georgia.

Martin O’Neill’s men got off to the ideal start in Tbilisi as Shane Duffy headed them into a fourth-minute lead, but Valeri Qazaishvili’s smart 34th-minute finish following a neat move on the edge of the area earned the hosts a 1-1 draw.

The Republic host Serbia in Dublin on Tuesday in a match which could go a long way to deciding who gets the automatic qualifying spot for Russia.

Wales moved to within two points of second place as 17-year-old substitute Ben Woodburn marked his debut with a brilliant winner four minutes after coming on against Austria.

The Liverpool forward arrowed a shot into the bottom corner from the edge of the area to earn the hosts a 1-0 win in Cardiff and all but ended Austria’s hopes of qualifying.

Ukraine took advantage of some bizarre circumstances in Group I to leap from fourth place to first with a 2-0 win at home to Turkey.

Borussia Dortmund’s new signing Andriy Yarmolenko struck twice in the first half to put Ukraine in pole position in the tightest of the nine qualification pools.

They are one point clear of Croatia, who have a game in hand after their match at home to Kosovo was abandoned after 27 minutes, with the score at 0-0, due to heavy rain which left the pitch in Zagreb unplayable.

That game is now set to be played on Sunday.

Iceland are also one point off Ukraine, although their hopes were hit by a 1-0 loss in Finland.

Alexander Ring’s eight-minute free-kick ended up being the deciding goal, while Iceland finished the match with 10 men following the 75th-minute dismissal of Rurik Gislason, who picked up two yellow cards in three minutes.

Turkey are two-points further back in fourth.