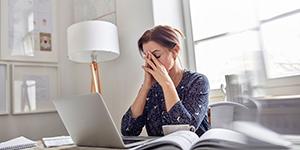 Every woman experiences the menopause differently, but many just aren’t prepared for the range of symptoms and emotions this life shift can involve.
Oestrogen is the main hormone that reduces during the menopause. It affects many different areas of your body – including your brain, so can cause many symptoms when its levels start to naturally fall. And these signs might occur even if you’re still having periods. This time, called the perimenopause, can last for several years. It means many women won’t make the connection to their hormones and end up suffering in silence.
Dr Louise Newson, a GP who specialises in menopause (and runs a regular private menopause clinic at Parkway Hospital in Solihull), is passionate that this needs to change. She says she is often disappointed about how little accurate information there is for women to learn about the menopause. Which seems silly, considering it’s something that’s going to happen to all of them.
“Ten years ago if I’d had this conversation I would have said “oh, apart from night sweats and hot flushes, there’s not that many other symptoms” but now I’ve seen hundreds and hundreds of women all telling me about all these other symptoms related to their changing hormone levels. And it’s 2017 and many women are having rubbish lives because of it. And it doesn’t have to be like this,” she says.
Dr Newson wants women to know they’re not alone. Here she explains the unexpected symptoms the menopause can cause:
1. Anxiety and depression
It’s often the symptoms people can’t see that lead to the most difficulties, says Dr Newson.
Feelings of depression – and low self-esteem, anxiety and panic attacks – are very common symptoms of the menopause, she reveals. She has seen loads of women who have wrongly been prescribed antidepressants. Many also become fearful of everyday scenarios, she explains:
“I hear from a lot of women who find they’re too scared to go into their car or they don’t like their husband’s driving anymore. They’ll say they just worry about things they’ve never really worried about before.”
Anxiety and depression symptoms can be debilitating and impact on work and family life. If you’re experiencing anything similar, you should see your doctor.
2. Irritability
Think the menopause will finally mean you’re free from PMS? Not necessarily unfortunately, says Dr Newson. It’s not uncommon for mood swings to appear during this time which can have a big impact on relationships.
“People tell me how cross they get – fed up with their children and fed up with their husbands. They often don’t want their partner touching them. When women get better they realise how bad-tempered they’ve been and how hard it’s been for their partner to live with them.”
3. Fatigue
It might not be too surprising to learn that sleep becomes harder during perimenopause and menopause. Night sweats are common, of course. But even if you don’t experience those, you might be more tired than normal and put it down to an exhausting life – perhaps you have a stressful job, or grown up children giving you grief?
Dr Newson says if you can’t get through the day without needing a nap, that’s a sign you might need some help.
“A lot of people think they’re tired because they have a new job or their children are stressing them out. I know myself when I was having symptoms I felt so tired and I just blamed it on work. And now I’m doing more work and I’m less tired! A lot of women tell me they literally come home from work and go straight to bed. Or they have a nap in the afternoon but they’ve never told anyone because they think it’s just what happens when you get a bit older, which is awful,” she says.
4. Joint pains
Falling oestrogen levels affect the joints in numerous ways making movement feel stiffer and more painful for some people. But many women will be misdiagnosed with arthritis when it’s likely related to depleting hormones. It also means women are likely to stop exercising, even if they used to enjoy it before, potentially making other symptoms worse, says Dr Newson.
5. More frequent urination
We’re not very good at talking about bladders, but if you’re going through the menopause or perimenopause, you might find you’re getting up more frequently to pee in the night or even experiencing bladder weakness. Dr Newson explains it’s because oestrogen affects the pelvic floor and bladder too.
“Often someone just wouldn’t think to trouble the doctor because everyone knows your bladder gets a little bit weaker as you get older. And it’s embarrassing if you cough and sneeze and get a little bit of wee in your pants. You likely wouldn’t talk to your friends about it, even though your friends are probably suffering the same.”
The doctor’s advice
Dr Newson’s advice is clear, if you’re experiencing any of these symptoms, there are a range of treatment options, so make an appointment with your GP.
Dr Louise Newson has been working with Menopause & Me – a new website dedicated to supporting women throughout their menopause journeys.