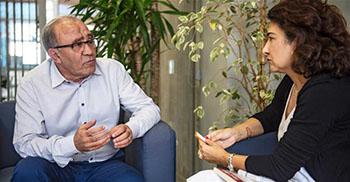 Abdullah Öcalan, the imprisoned leader of the outlawed Kurdistan Workers’ Party (PKK), has sought to adapt the group’s ideology in order to secure foreign support, according to journalist Fikret Bila, the editor-in-chief of daily Hürriyet.

While many PKK members emphasize the importance of achieving a gender-free, ecological society, the democratic nature of this ideology is simply “rhetoric,” said Bila, the author of “The Ideological Codes of the PKK,” which was recently translated into English.

“Öcalan aims for a Kurdish nation state that is not democratic but totalitarian,” Bila told the Hürriyet Daily News in an interview.

Why did Öcalan set out to pursue a new ideology after the collapse of the Soviet Union? After all, not all countries and organizations gave up on Communism or the ideology of Marxist-Leninism.

American political theorist Murray Bookchin’s social ecology thesis was among the key examples of this. When I read books written by Öcalan in İmralı Prison, as well as the Kurdistan Communities’ Union [KCK] contract, I recalled that I read these ideas somewhere before and realized that Öcalan was inspired by Bookchin for his new thesis.

So Öcalan set out to search for a new ideology in order to secure his and the PKK’s survival?

One of the characteristics of Öcalan and the PKK is that they can quickly adapt to new circumstances. Founding a socialist organization was what “sold” during the Cold War, because Marxist-Leninist ideology was easily accepted in both foreign and domestic left-wing circles. It also secured support from Eastern bloc countries. But after the collapse of the Soviet Union, the idea of democracy began to rise in value. Öcalan then quickly endorsed the values of the EU and started talking about a “democratic republic” until 2004, when he deviated to Bookchin’s thesis.

Why did he feel the need to change ideology again?

His thesis for a “democratic republic” did not find much of a response. The pressure he exerted by using terror and the political atmosphere of that time did not match up with each other. At any rate, while in İmralı Prison he adopted a “wait-and-see” approach, especially while he was waiting for the abolition of the death penalty.

The reason that pushed him toward Bookchin’s thesis was the search for a new structure to organize an independent, united Kurdistan state, which he never gave up. I think he found Bookchin’s thesis – which is at the source of the green movement, collective anarchism and social ecology – to be easily acceptable. So Öcalan started to propagate an ecologist, gender-equal, communal confederative Kurdish state. But he never actually says he was inspired by Bookchin.

How would you summarize Bookchin’s thesis in a nutshell?

He argues in favor of developing a new ecological leftist approach based on replacing nation states with ecological societies loosely bound in communalism, and forming a confederal system via municipalities. In sum, nature should not be harmed, human beings should not harm each other, there should be no war, communes should be formed and only a minimal amount of technology should be used.

The PKK’s implementations differ somewhat from that ideology.

PKK’s ideology overlapps with that of Bookchin’s thesis but the practice is different. Bookchin foresees a system of face-to-face democracy. But when you look at the KCK contract, which is like the PKK’s constitution, you see a strict hierarchy, even one-man rule. All decisions taken in the communes are sent for approval of the president and there is a lifelong presidency. This is not a democratic structure. Another contradiction is that armed struggle and terrorism cannot be found in Bookchin, who is also against the nation-state. Öcalan appears to also be against the nation-state in rhetoric but the KCK contract envisages the founding of a Kurdish nation-state.

The Syrian war provided the first occasion to put this thesis into practice. The setting up of communes, women’s units, and having co-chairpersons (one man and one women) heading the communes were all put into practice in the vacuum that erupted in northern Syria.

Another point of deviation seems to be ethnicity.

At a time when Öcalan presents as a Marxist-Leninist, he does not totally put this ideology into practice. We cannot say that the PKK is waging a class struggle. The whole issue of the PKK is based on leading the Kurdish nation-building process. The whole purpose is to strengthen Kurdish nationalism and creating awareness that there is a separate Kurdish nation, especially in Turkey’s southeast, Syria and Iraq. Democracy exists in its rhetoric but not in practice. In fact it is totalitarian.

What do you see when you look at the Kurdish political movement?

The Kurdish political movement is based on Kurdish nationalism but its members do not seem to have examined the PKK’s ideology. In fact when I tried to talk to some of them about it, I realized they were not even aware of the PKK’s ideology. We are talking about a structure based on classic Kurdish nationalism, pursuing policies under the control of a terrorist organization.

Many foreign readers will be curious about how Öcalan, a prisoner in Turkey, was able to formulate a new ideology simply by reading books, putting it into practice from his prison cell despite limited communication means.

After Öcalan was apprehended, Turkey abolished the death penalty, which was believed to be a very difficult step to take. It was a move showing a state acting with some rationale. The state considered whether a peaceful solution to the problem could be sought through Öcalan.

Looking from the outside this was not an approach that was much expected from Turkey, but the state did show this maturity. This phase went as far as the Oslo process in 2009, when members of the National Intelligence Agency [MİT] spoke with PKK members in a bid to find a solution. Then we had a ceasefire period and a peace process between 2011 and 2015, when the government tried to influence Kurdish citizens through Öcalan in order to include them in the democratic system. Governments prior to 2002 also made such attempts. An important motivation behind the steps Ankara undertook in 1999 and 2000 was Turkey’s EU membership application. State institutions aimed to accelerate democratization, prevent the division of the country, and safeguard the country’s secular nature.

Did the state thought that Öcalan could seek for a peaceful solution while in the pursuit of new ideologies?

Apart from in the initial stages, no restrictions were put on Öcalan’s reading. He also wrote books in İmralı. The Turkish state tried to see whether the PKK could be brought to denounce violence, abandon arms, and integrate into the democratic system. Eventually Öcalan’s peace message was read in Diyarbakır in 2013. But the PKK resorted to urban warfare, based on the idea that it could seize control of Turkey’s southeast, just as it did in northern Syria.

Some believe it was the government that ended the ceasefire and peace process in the summer of 2015 due to its need to increase its votes.

There were two processes at work at the time: First there was the Syrian war and the fact that PKK-linked groups started to secure sovereignty over parts of northern Syria through urban warfare. They assumed they could do the same in Turkey while the solution process was continuing and resorted to riots in several cities and provinces. We now see that actually in the four-year ceasefire period they basically turned these cities and provinces into arms depots. So the PKK’s policy in Turkey changed due to foreign factors.

Second, the AKP government realized that the policy it pursued had not brought about positive results. It also concluded that the public did not have a positive perception of the peace process. It observed a shift of votes to the Nationalist Movement Party [MHP], and when the PKK resorted to urban warfare the government decided to shift its policies 180 degrees.

For a long time the international community has been reluctant to recognize the Syrian Kurdish Democratic Union Party (PYD) as the same thing as the PKK. You argue otherwise in the book.

There is an approach in the West that the PYD emerged during Syria’s civil war, and that acts during war conditions cannot be defined as terror. In addition, the U.S.’s interests require it to support the PYD in order to gain a position in northern Syria. This may well be conjectural support, but ultimately the PYD is a wing of the PKK, formed upon Öcalan’s instructions from İmralı.

What do you project will take place in the near future?

The Syrian civil war could change many things. The war could end up formally dividing the country. Öcalan would in that case prefer to concentrate on Syria and northern Iraq. If he can set up state-like entities independent of Damascus and Baghdad, connecting them and forming a corridor to the Mediterranean Sea, he would have united two pieces of the four areas that the PKK wants to join together.

But there also the question of Masoud Barzani and the Kurdistan Regional Government (KRG) of northern Iraq, which is due to hold an independence referendum at the end of this month.

I think Barzani’s decision to call for the referendum is also related to Syrian war. If a state entity under the control of the PKK in northern Syria becomes established as a sub-state of a federation, he is concerned that this could spill over to northern Iraq and challenge his power. Barzani is basically thinking: “If there is going to be an independent Kurdish state, it should happen under my leadership and not that of the PKK. If I am the first one to declare a Kurdish state then I will take prominence over other pieces and become the center of attention.”

One could then project a more violent struggle between the PKK and Turkey going beyond Turkey’s borders.

That struggle has started already. The first sign was the Euphrates Shield Operation into northern Syria. The stance of the U.S. and Russia are very important. Currently the most important problem for Ankara is the support given by the U.S. to the PYD. This problem is becoming heavier for Turkey.

We are going through a process that is forcing changes to the outcomes of the First World War. Turkey is concerned that such a process implies a change to its borders, and therefore it sees this as an existential problem. That is why we are hearing President Erdoğan so often repeating: “One homeland, one state, one nation.” The emphasis on the territorial integrity and political unity of Iraq and Syria stems from Turkey’s concerns over its own territorial integrity and political unity.

Who is Fikret Bila?

Fikret Bila has been the editor-in-chief of daily Hürriyet since February 2017.

He graduated in 1979 from Ankara Gazi University’s Department of Economy.

He began his journalitic career at the Yankı newspaper, where he worked between 1977-1980, and returned to the profession in 1986 after working at the Turkish Court of Accounts.

Since then he has become a household name in Turkish political reporting, writing first for Nokta magazine and then for daily Milliyet, where he worked as Ankara bureau chief from 1995 to 2013 and as editor-in-chief from 2013 to 2016.

He has given investigative journalism courses at the communication faculties of both Ankara University and Gazi University.

Bila has presented a number of TV programs on private broadcaster CNN Türk and he has penned a series of books, including “The Civilian Coup Attempt and the Iraq Wars in Ankara” (2003), “Which PKK? New Moves on the Chessboard” (2004), abd “The Commanders’ Front” (2010).