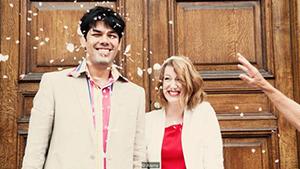 Many committed singles have watched as their married friends became insufferable and boring. But is this really true?
By Christian Jarrett

“Why is it there are so many unmarried women in their thirties these days, Bridget?” – the dinner party scene in Bridget Jones’s Diary is excruciatingly familiar to anyone who has ever found themselves, alone, surrounded by a room full of married friends.
While psychologists may not have fully resolved the question of whether marriage makes people self-satisfied like Bridget’s paired-up friends, or if instead smug people are just more likely to get married, research suggests the experience of committing to and settling down with another person really does change our personalities for better and for worse… until death do us part.
It makes sense that it might – after all, publicly binding yourself to another person takes loyalty and forward thinking, not to mention a radical change of lifestyle for some, and of course living day in, day out with the same person requires a certain degree of patience and diplomacy.
Whatever the personality changing effects of marriage might be, you’d think the question would be a research priority – around the world, millions of us tie the knot every year.
In fact, research into this question is surprisingly thin on the ground. Probably the best evidence we have comes from a recent German study, in which researchers looked at personality changes among nearly 15,000 people over a period of four years.
Importantly, 664 of the participants tied the knot in the course of the study, allowing Jule Specht at the University of Münster and her colleagues to see how their personalities changed as compared with the rest of the sample who did not get married. The researchers found that wedded participants showed decreases in the traits of extroversion and openness to experience as compared with the others.
This difference was relatively modest, but still, it perhaps provides some concrete evidence to back up the suspicions of single people up and down the land – that their married friends aren’t quite as much fun as they used to be.
The pattern is backed up, at least among women, by an earlier and much smaller US study published in 2000, in which the researchers tested the personalities of just over 2,000 middle-aged participants twice over of a period of between six and nine years.
In that time, 20 of the women married while 29 of them divorced. Relative to those who tied the knot, the divorcees showed increased extroversion and openness, as if freed from the shackles of wedlock. Newly married men, by contrast, showed benefits compared with their divorced peers, scoring higher on conscientiousness and lower in neuroticism.
The conscientiousness boost among married men seems intuitive. Anyone who has been married (or in a long-term committed relationship) will know that it takes certain skills to keep the marital ship afloat through sometimes choppy domestic waters. Surely then, marriage will hone these skills. These are exactly the findings of a new paper published this year.

The team of Dutch psychologists, led by Tila Pronk at Tilburg University, reasoned that two of the most important marital skills or traits are self-control (having the ability to bite your tongue for the long-term sake of the marriage) and forgiveness (so that you can get past all those times that your partner errs in some way, be that leaving their clothes on the floor or flirting with the neighbour).
The researchers recruited 199 newlywed couples and, within three months of their wedding, measured how forgiving each partner was (the participants rated their agreement with items like “When my partner wrongs me, my approach is just to forgive and forget”) and their self-control (participants rated their agreement with items like “I am good at resisting temptation”). The participants then repeated these measures each year for four further years.
The results showed that the participants increased in forgiveness and self-control over the course of the study. Statistically speaking, the increases in forgiveness were moderate while the increases in self-control small, but Pronk and her team pointed out that they were equal to the self-control gains seen in people who have completed psychological programmes specifically designed to increase trait self-control.

What about that self-satisfied vibe that married couples sometimes give off? The most relevant evidence here comes from studies into how life-satisfaction or happiness changes after marriage. Singletons like the 30-something Bridget Jones will be glad to hear that that while satisfaction does rise for a while after marriage, it usually returns to baseline levels after a year or so.
However, while that’s the overall picture, it may not be true for everyone. We often talk about some people being good husband or wife “material” (while others seem more suited to a life of bachelorhood) and consistent with this view, the evidence suggests that how marriage changes a person’s happiness varies depending on their pre-wedding personality.
For some people, marriage does appear to provide a lasting happiness boost: specifically, more conscientious, introverted women and more extroverted men show prolonged increases in life-satisfaction following marriage, presumably because the new married lifestyle suited these personality types, although this has not yet been studied.
Last of all, what about the popular idea that married couples seem to take on each other’s personalities over time? It certainly seems that way when you spot older married couples in comically matching jumpers or tracksuits.
It’s probably a myth. If this were the case, you might expect for those who have been married for longer to be more similar to their partners. But when researchers from Michigan State University assessed the personalities of over 1,200 married couples, they found little to no evidence for this being the case. The reality is that people with more similar personalities are more likely to get married in the first place.
Taken altogether, the research suggests that marriage does lead to subtle personality changes. But this has nothing on the personal upheaval that follows what often comes next: babies.
Dr Christian Jarrett edits the British Psychological Society’s Research Digest blog. His next book, Personology, will be published in 2019.