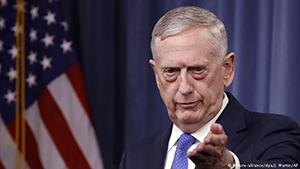 US Defense Secretary James Mattis has said the US will respond with “massive” retaliation to any threat to the US or its allies. This after North Korea claimed to have tested a hydrogen bomb earlier on Sunday.

“Any threat to the United States or its territories, including Guam, or our allies will be met with a massive military response, a response both effective and overwhelming,” Mattis said.
The US was “not looking to the total annihilation of a country,” but had “many options to do so,” Mattis added.
The tough talk comes as the Trump administration searches for a response to the escalating crisis.
On Sunday Pyongyang said it had tested a hydrogen bomb that can be loaded onto an intercontinental ballistic missile (ICBM). If confirmed, it would be the most powerful device ever tested by North Korea.
US President Donald Trump was briefed on all possible military options against North Korea during a meeting with his national security team on Sunday, Mattis said.
South Korea’s “talk of appeasement” with North Korea will not work, Trump said, adding that Pyongyang will “only understand one thing.”
International reactions
Russian President Vladimir Putin and his Chinese counterpart, Xi Jinping, agreed to “appropriately deal with” North Korea’s nuclear test, China’s state news agency Xinhua reported.
Japanese Prime Minister Shinzo Abe said North Korea’s “nuclear and missile development programs pose a new level of a grave and immediate threat” and “seriously undermines the peace and security of the region.”
Abe also telephoned with Trump to discuss the test, according to a White House statement issued late on Sunday.
North Korean leader Kim Jong Un is “cruel and evil” and China could do more to stop his aggression, Australia’s Prime Minister Malcolm Turnbull said on Monday.
Sanctions option wearing thin
The US is preparing new sanctions to further isolate North Korea, including actions against its trading partners, Treasury Secretary Steven Mnuchin said.
The EU said it would also consider tougher sanctions and South Korea vowed to push for the most powerful sanctions yet at the UN Security Council, which is to discuss the test on Monday.
Mattis called on North Korean leader Kim Jong Un to heed the UN Security Council.
President Moon Jae In said his country would not allow its neighbor to continue to advance its nuclear and missile technologies.
South Korea’s military also said it had carried out a combined live-fire exercise simulating an attack on the North’s nuclear testing site. The drill involved Hyunmoo ballistic missiles and F-15 fighter jets firing into the Sea of Japan.
Shoring up finances
South Korea’s finance minister, Kim Dong-yeon, said on Monday the ministry will implement policies to support financial markets if instability caused by the latest nuclear tests in the north show signs of spreading to the real economy.
“We are aware that there could be negative ripple effects should geopolitical risks resurface,” Kim said in a policy meeting urgently scheduled with the central bank and financial regulators before financial markets open.
“We will monitor the economy around the clock and make swift, stern responses to stabilize the markets according to our contingency plan as needed,” Kim said.
jbh/kl (dpa, Reuters, AP)