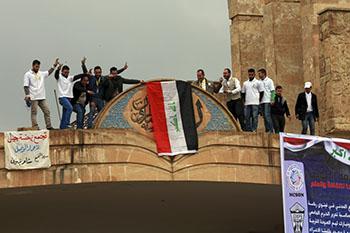 Those who believe the people of the Middle East unsuited to democracy may think their bias has been borne out by events. That is not what I saw in Iraq.
The devastation the so-called Islamic State wreaked on the Iraqi city of Mosul stuns the senses. Suicide bombers blew up the hospital so that ISIS leaders being treated there couldn’t be captured and interrogated. A water plant mechanic tells of being lashed 40 times because his wife answered the door unveiled. An engineer tells of seeing neighbors burned alive.

Children haven’t been to school in nearly three years. The jewel of a university, some of the most modern buildings in the city, are rubble; its library’s 2 million volumes now ashes. ISIS defaced statues, burned churches, blew up the central mosque, and knocked over the minaret of Mosul’s landmark mosque. Junk yards of burned vehicles extend thousands of yards along the highway. I witnessed all those things in Iraq at the invitation of the UN High Commissioner for Refugees to look at the challenges of political, economic, and social reconstruction.
An extended Sunni family from the Kurdish region that came to Mosul during the fighting, suspected of complicity with ISIS, isn’t being allowed to return. The Kurdish regional government argues it needs to screen everyone who fled toward ISIS to prevent infiltration; others see a pattern of Kurds consolidating control over disputed territory. Kurdish leaders say political and military failures of the Baghdad government necessitate military forces independent of Baghdad; the central government argues it is yet one more effort by Kurds to destroy the country—an accusation reinforced by Kurdistan holding a referendum in September on becoming an independent state.
Catholics are hesitant to return to Mosul because they have lost trust in the people around them; others resent government money going to Catholics because the global faithful have contributed so generously to them. Sunni complain security forces are rampantly pillaging and wonder why the U.S. and Europe care so much more about the fate of Catholic and Yezidi communities than them, who hold the country’s prospects for peace in their hands. They wait expectantly for largesse from the Gulf states to rebuild their homes and press their case to the Baghdad government. Many Iraqi Army and peshmerga units folded quickly or engaged in retribution, alienating communities they were sent to protect. Iraqi National Army soldiers fly flags of Shia militia over their posts, and say they can’t wait to get back to the south because “all Mosul is ISIS.”
One could be forgiven for thinking Iraq remains a tangled mess of sectarian division and political failings, whose people are incapable of resolving their differences and working together to rebuild the country. Those who believe the people of the Middle East unsuited to democracy may even take satisfaction their bias has been borne out by events. That is not what I saw in Iraq.
What I saw in Iraq this last week was a prime minister striving to build commonality across sectarian communities, to redress grievances and put his personal stamp on efforts to establish accountability for the conduct of security forces. Sectarian leaders are jockeying for position in advance of next year’s parliamentary elections. Politics rather than violence is the means Iraqis are using to contest the crucial issues—even the Kurds mildly say their referendum will be non-binding, “the start of a negotiation” rather than an ultimatum (although it must be admitted that comes only after the U.S. conveying it will not recognize the referendum nor support Kurdish independence).
Iraqi security forces proved themselves up to the battle, their elite (and cross-sectarian) counterterrorism forces so committed that they sustained 40 percent casualties and continued to fight through to the finish of Mosul’s liberation. Forty percent casualties: more than American Marines took at Guadalcanal. Soldiers from Basra may hang banners of Shiite martyrs, but for those I talked to their inclination is to return home, not stamp a boot on Sunni in Mosul. Iraq has no shortage of problems still to solve, but this is not the Iraq of Prime Minister Nouri al-Maliki, whose government fomented sectarian conflict, cozied up to Iran, politicized security forces and culled Sunni leaders from its ranks, and distorted the constitution to his political advantage. Prime Minister Abadi is rebuilding trust in the state by the time-honored democratic means of winning the political argument.
Post-war reconciliation isn’t just challenging in Iraq; it’s difficult in the aftermath of every war. Resentments seethe, retribution is meted out officially and unofficially. Yet for all the trepidation about stitching Iraq back together again after ISIS, Mosul is returning to vibrancy. Markets are bustling, traffic is heavy, children smile at you and kick soccer balls around. They deserve America’s continued help.
Defense Secretary James Mattis has said that the U.S. will keep troops in Iraq after the defeat of ISIS. On the diplomatic front, Jordan is reopening its border crossing to Iraq, and Saudi Arabia is returning its ambassador after more than a decade—it seems finally to realize that, if it seeks to reduce Iranian influence in Iraq, it should compete for the space. That is a good start. But there is a clear need for more political attention, more assistance in fostering the institutions of democracy and mediating among Iraq’s communities, more inclusion of Iraq in America’s broader Middle East policies, and more advocacy on their behalf with governments and NGOs and international organizations to give generously for reconstruction. America ought not to (again) make the mistake of letting military assistance outpace civilian engagement in Iraq, especially not now as they succeed militarily and progress into the challenges of political reconciliation.