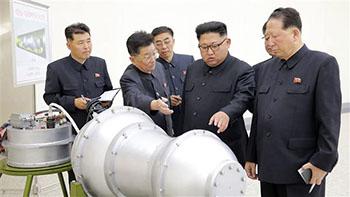 The South Korean military says the North appears to be getting ready for another missile launch, possibly an Intercontinental ballistic missile (ICBM) test, a day after Pyongyang sent shockwaves across the world by detonating a hydrogen bomb, which is said to be the most powerful weapon it has ever tested.
“We have continued to see signs of possibly more ballistic missile launches. We also forecast North Korea could fire an intercontinental ballistic missile,” said Chang Kyung-soo, a Defense Ministry official, on Monday.

Seoul’s defense officials told a parliamentary briefing that Pyongyang’s nuclear test a day earlier had an estimated strength of 50 kilotons, making it five times the size of its previous test in September 2016.
The bomb was also some three times more powerful than the US device that destroyed Hiroshima in 1945.
Earlier in the day, the South conducted a live-fire ballistic missile exercise, simulating an attack on the North’s main nuclear site.
The combined drill, which was carried out by the South Korean army and air force, involved the launches of a surface-to-surface missile and a long-range air-to-ground missile, Seoul’s Joint Chiefs of Staff said in a statement.
“The training came in response to the North’s sixth nuclear test… and involved the country’s Hyunmoo ballistic missile and the F-15K fighter jets,” it added.
According to the body, the missiles “accurately struck” targets in the Sea of Japan.
The South’s military also explained that the ranges of the missiles were set in consideration of North Korea’s Punggye-ri nuclear test site, which is located in the country’s North Hamgyong Province.
South Korea said it was also preparing fresh military drills with the US.
Seoul and Washington are also set to install more of the THAAD missile systems in response to the nuclear test by North Korea, the South’s Defense Ministry said Monday.
Two launchers of the so-called Terminal High-Altitude Area Defense (THAAD) are already operational, but concerns about their possible environmental had forced Seoul to suspend the installation.
“Four remaining launchers will soon be temporarily deployed through consultations between South Korea and the US to counter growing nuclear and missile threats from the North,” the ministry said in a statement.
On Sunday, Pyongyang announced it had successfully conducted the hydrogen bomb test. According to international seismic agencies, the test created an artificial 6.3-magnitude earthquake.
US, Japan urge ‘maximum UN pressure’
Following a phone call with his US opposite number, Rex Tillerson, Japanese Foreign Minister Taro Kono said Monday that the two sides had agreed to cooperate closely in order to exert pressure on North Korea through the UN.
“We agreed on close cooperation between Japan and the United States to exert maximum pressure on North Korea and the UN, including the adoption of Security Council resolutions,” said the top diplomat.
The phone conversation comes ahead of an emergency UN Security Council meeting later today, which is scheduled to focus on fresh sanctions against Pyongyang.
Moon, Abe want tough UN bans
Meanwhile, Japanese Prime Minister Shinzo Abe and South Korean President Moon Jae-in expressed their support for a new UN Security Council resolution against the North in a phone conversation on Monday.
Abe called the test “a head-on challenge to the international community.”
He also said Tokyo will urge China and Russia, viewed as traditional allies of North Korea, to cooperate to put more pressure on Pyongyang.
Moon also gave assurances that his country will maintain a solid security stance through its alliance with Washington.
Both leaders also spoke to Trump in separate telephone conversations in recent days over the North Korean nuclear program.
BRICS deplores North Korea N-test
The BRICS group of emerging economic powers – Russia, China, Brazil and India – have strongly deplored North Korea’s nuclear test in a draft communiqué seen by Reuters on Monday.
The communiqué, which is expected to be issued at their meeting underway in China, however, calls for the North Korean nuclear issue to be resolved through peaceful means.
Beijing files formal protest with Pyongyang
Pyongyang’s test prompted China on Monday to lodge an official protest with North Korea.
China has “launched stern representations with the person in charge of the DPRK embassy in China,” said Foreign Ministry spokesman Geng Shuang, using an acronym for the North’s official name, the Democratic People’s Republic of Korea.
Beijing “opposes the DPRK in carrying out nuclear missile development and we are committed to denuclearization of the peninsula. This position is well-known and the DPRK also knows this position perfectly well,” he added.
Beijing, Moscow won’t allow chaos on Korean Peninsula
Meanwhile, Chinese President Xi Jinping met with Russian President Vladimir Putin, on the sidelines of the BRICS summit in the southeastern Chinese city of Xiamen on Sunday.
The two leaders vowed not to allow chaos on the Korean Peninsula, said Kremlin spokesman Dmitry Peskov.
“The two leaders agreed to stick to the goal of denuclearization on the Korean Peninsula and keep close communication and coordination to deal with the new situation,” the Xinhua news agency said.
Merkel: Trump must stick to peaceful ways
German Chancellor Angela Merkel also touched on the North Korea issue during an election debate on Monday, highlighting the role of the US president in efforts to end the crisis.
“We need the US as a power for peace and we need to do everything possible to get them on the right and sensible path,” she said in response to a question about the right course of action on North Korea.
Merkel urged Trump to “consider a peaceful, diplomatic solution” regarding the North’s nuclear and missile program.