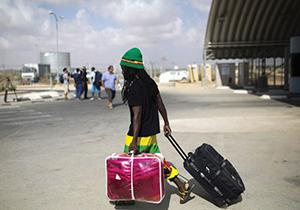 Prime Minister Netanyahu took a shot at the High Court of Justice about the status of most of the migrants.

At Sunday’s cabinet meeting, Netanyahu said, “I have decided to establish a special ministerial committee that will meet already this week with representatives of local [south Tel Aviv] residents… in order to set in motion practical solutions to this problem.”

Be the first to know – Join our Facebook page.

“The main purpose will be to return the neighborhoods to their local residents and to deport illegal infiltrators from Israel whose place is not here, just as we have deported around 20,000,” he said.

The prime minister told a story about meeting a 72-year-old woman named Sofia who he said was having many difficulties because her building, in which she lives on the sixth floor, was “filled with illegal infiltrators.”

He also took a shot at the High Court of Justice about the status of most of the migrants.

In the past, the court has ruled that most of the migrants meet the international Convention on Refugees protections for being unable to be returned to their countries of origin – mostly Eritrea and Sudan.

Netanyahu emphasized that he viewed the migrants as infiltrators who “were not refugees. A very small number of them are refugees. They are illegal infiltrators [who are looking] to find work in the State of Israel and we have the right like any nation to guard our borders and to remove from our borders whoever entered illegally.”

Further, the prime minister said he had saved the country from having its Jewish majority endangered by ordering the building of a border wall between Egypt and Israel, which cut-off what had become a flow of sometimes thousands of illegal migrants per month.