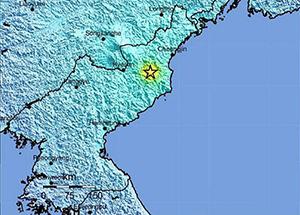 North Korea has hailed its sixth “perfect success” of a nuclear test. The seismic readings indicate it is bigger than any other it has conducted, but the apparent collapse of a tunnel at the nuclear test site could provide valuable information, nuclear defence analyst Catherine Dill writes.

Seismic readings from the US and China place the explosion at a magnitude of 6.3, so we already know that this is likely to be the most powerful of North Korea’s nuclear tests.
This magnitude roughly corresponds to the lower end of predicted yields of a thermonuclear weapon – basically the second generation of nuclear weapon, which works in two stages by having one bomb set off another bomb to generate a larger explosion
It is not yet clear exactly what nuclear weapon design was tested, but based on the seismic signature, the yield of this test definitely is an order of magnitude higher than the yields of the previous tests.
Some estimates say that this latest test comes in at about 100-150 kilotonnes. For comparison, Hiroshima was about 15 kilotonnes. North Korea’s last test in September 2016 was estimated at between 10 and 30 kilotonnes.
We can guess this because equations have been developed that translate magnitude of a tremor into the estimated yield of a nuclear device tested, which is basically the strength of the bomb.
But it also depends on the geology of the test site and how deep the tunnels are. We don’t have all that information and that’s why the information about the yields are all so preliminary.
So what else can we tell from this latest test? This is where an apparent tunnel collapse reported at the nuclear test site could be very useful.
The other way to learn is to monitor the composition of radionuclides released, which are the products of the nuclear reaction that are released into the atmosphere. In the past the tests have been very well contained as the tunnels where the tests took place were sealed. So we have not had much to analyse in recent years.
But this explosion was large and it also looks like a portion of the tunnel collapsed. The US Geological Survey recorded a second event approximately eight minutes after the test. The USGS, as well as China, have assessed this event as a “collapse” of the cavity.
Why would the tunnel collapse? It could be that the tunnel was not constructed sufficiently to handle an explosion of that size. It’s also possible that they intended for this collapse to occur – a way of signalling to the world that this was an authentic test through radionuclide release, a serious advance. It is still too early to tell.
What it does mean is that we are likely to get information to analyse this nuclear explosion to determine what happened under the mountains of the test site. This will take weeks or even months as monitoring sites run by the CTBTO detect these radionuclides.
The information they give us may tell us the composition of the warhead: how much fissile material there was and what kind – was it plutonium or highly enriched uranium? North Korea produces both and has capability for both.
North Korea’s sixth nuclear test is not definitively a thermonuclear weapon from the seismic signature alone, but it appears to be a likely possibility at this point.
This progress is not surprising, though the magnitude of this test is a stark reminder of the seriousness of the current moment. According to South Korean government seismologists, this test was five to six times more powerful than past tests.
So what is next for North Korea and where could they go from here? Part of this depends on how the US responds.
The concern among some analysts is that North Korea will feel compelled to prove this warhead they have just tested can actually fly on an ICBM. They could want to try a live firing exercise or even an atmospheric nuclear test, which was how the earliest nuclear devices were tested until that was banned. This would be among the most provocative gestures they could make in the testing arena.
The timing of this test may or may not be politically significant. US-ROK joint exercises recently concluded. North Korea has been intimating that a test may occur this year, and the exact timing of this test may be for technical reasons more than political.
And there is no doubt that they will glean useful technical information from this test and be able to make slight adjustments to the warhead to be confident it will work in the future.
In the official state announcement after the test, Pyongyang claimed a successful test of a two-stage hydrogen (thermonuclear) bomb ready to be deployed on an ICBM that Kim Jong Un inspected the previous day.
Cautious analysts have reason to continue to debate the exact nature of the device, but with the results of this test it will be difficult for observers to continue to claim that North Korea does not yet have a working nuclear weapons program.
Catherine Dill is a senior research associate at the Middlebury Institute of International Studies at Monterey.