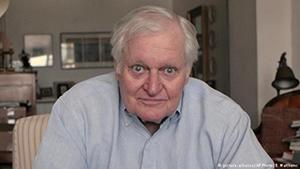 One of the world’s greatest contemporary poets, John Ashbery, has died aged 90. Critical recognition in the 1970s turned him from an obscure avant-garde experimentalist into one of America’s most important poets.

Ashbery’s husband, David Kermani, said the poet died early Sunday at home in Hudson, New York, of natural causes.
His 1975 collection “Self-Portrait in a Convex Mirror” was the winner of the book world’s unofficial triple crown: the Pulitzer Prize, the National Book Award and the National Book Critics Circle prize. The collection’s title poem is considered to be one of the masterpieces of late-20th-century American poetic literature.
“No figure looms so large in American poetry over the past 50 years as John Ashbery” and “No American poet has had a larger, more diverse vocabulary, not Whitman, not Pound,” Langdon Hammer, chairman of the English Department at Yale University, wrote in 2008.
Stephen Burt, a poet and Harvard professor of English, has compared Ashbery to T. S. Eliot, calling Ashbery “the last figure whom half the English-language poets alive thought a great model, and the other half thought incomprehensible.”
Writing for Slate, the critic and poet Meghan O’Rourke advised readers “not to try to understand the poems but to try to take pleasure from their arrangement, the way you listen to music.”
In 1963, Ashbery became acquainted with Andy Warhol, having previously written favorable reviews of Warhol’s art.
His early work shows the influence of W.H. Auden, along with Wallace Stevens, Boris Pasternak, and many of the French surrealists (his translations from French literature are numerous).
“I don’t find any direct statements in life,” Ashbery once explained to the Times in London. “My poetry imitates or reproduces the way knowledge or awareness comes to me, which is by fits and starts and by indirection. I don’t think poetry arranged in neat patterns would reflect that situation.”
Many critics considered the titular work of his “Self-Portrait in a Convex Mirror,” an epic poem about art, time and consciousness, to be his masterpiece. The work was inspired by a 16th century Italian painting of the same name and explored modern consciousness over 400-plus lines, among them:
I feel the carousel starting slowly
And going faster and faster: desk, papers, books,
Photographs of friends, the window and the trees
Merging in one neutral band that surrounds
Me on all sides, everywhere I look.
And I cannot explain the action of leveling,
Why it should all boil down to one
Uniform substance, a magma of interiors.
jbh/kl (AP, The Guardian)