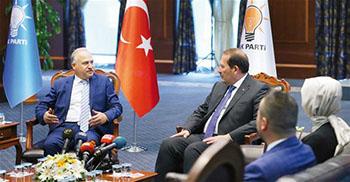 A delegation from the main opposition Republican People’s Party (CHP) visited the ruling Justice and Development Party (AKP) to extend Eid al-Adha greetings on Sept. 2, with the two parties agreeing on the importance of action in the ongoing crisis in Myanmar.

“The massacres of the Rohingya Muslims in Myanmar have saddened all of us. These massacres and sorrows are taking place in front of the eyes of the whole world. Nobody should sit back and watch this,” CHP Deputy Group Chair Levent Gök said at the meeting.

“All international organizations, especially the United Nations, should take a position on this issue very urgently,” Gök added.

During the meeting, he also stressed the importance of ending the process of the state of emergency as soon as possible. He said the CHP “supports the struggle against the Fethullahist Terror Organization [FETÖ] but does not approve the changing of laws and institutions with state of emergency decree laws.”

Gök said his party expects debates on the decree laws at parliament as soon as possible.

“Changes made through decree laws will harm options for the future, even after the presidential system goes into effect,” he added.

Only five of the many decree laws issued under the state of emergency since the July 2017 coup attempt have been discussed at parliament, Gök noted, also emphasizing the importance of inspection of those laws by the Constitutional Court.

Also speaking at the meeting, AKP Deputy Chair Harun Karacan criticized “the whole of Europe and the U.N.” for being “deaf to the massacre of Muslims in Myanmar.”

“Our biggest problem here is the fact that Islamic countries, which together have a population of 2 billion, cannot stand side by side,” Karacan said.

He also added that the AKP’s work on the decree laws was continuing and they will submit the laws for debate after parliament opens its new term.