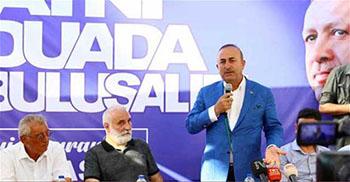 Turkish Foreign Minister Mevlüt Çavuşoğlu on Sept. 2 dismissed Berlin’s reaction to the arrest of German citizens in Turkey, local media have reported, a row which is worsening the nations’ already fraying ties.

“When we arrest [a coup plotter] Germany starts to get upset. But what are we supposed to do?” Çavuşoğlu said.

“This is also a Turkish citizen but it [Germany] asks ‘why are you arresting my citizen?’” he added.

Berlin on Sept. 1 said two more German nationals had been held in Turkey “for political reasons,” as Chancellor Angela Merkel warned Ankara that Germany could re-examine its policies following the latest Turkish action.

The latest arrests brings to 12 the total number of Germans in Turkish custody that Berlin considers political prisoners.

There is “no legal basis” for detention in most of these cases, Merkel said, according to remarks carried by Germany’s DPA news agency.

Merkel said she did not think it was appropriate to carry out further discussions with Ankara about its participation in a European Union customs union.

“We must react decisively,” Merkel told a business event in the southern city of Nuremberg, noting that Germany had already fundamentally revamped its relations with Ankara.

“Given the latest events, perhaps it is necessary to rethink them ever further.”

According to Doğan News Agency, the two German nationals most recently arrested are of Turkish origin and were detained at Antalya airport in southern Turkey over suspected links with last year’s failed coup.

“If it’s someone connected to the failed coup, if they supported it, then why are you protecting them?” Çavuşoğlu asked, speaking in Antalya at celebrations for the major Muslim festival of Eid al-Adha.

Relations between the two NATO allies have deteriorated sharply since Berlin sharply criticized Ankara over the crackdown that followed last year’s failed coup.

Yücel has now spent some 200 days in Turkish custody ahead of a trial on terror charges.

German journalist Meşale Tolu has been held on similar charges since May, while human rights activist Peter Steudtner was detained in a July raid.