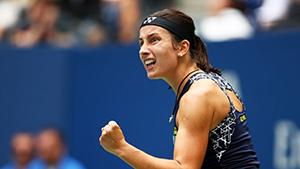 Maria Sharapova’s comeback grand slam ended in a fourth-round defeat by Anastasija Sevastova.
The Russian won the opening set but could not sustain the momentum and fell to a 5-7 6-4 6-2 loss.

This was only Sharapova’s fifth tournament since her comeback from a 15-month doping ban in April because of injury and she exceeded most expectations by getting this far.
Sharapova has had to battle in all her matches and it was no surprise to see her run out of steam, hitting 51 unforced errors, as Sevastova clinched victory after two hours and 16 minutes.
She is now 16/1 with Sky Bet to win the tournament in a market headed by Garbine Muguruza who is 2/1 and Karolina Pliskova who is a 6/1 chance.
This was a step up for Sharapova after her victories over Timea Babos and Sofia Kenin, with Sevastova through to the fourth round in New York for a second straight year.
The Latvian defeated Garbine Muguruza and Johanna Konta 12 months ago and has since climbed to 17th in the world rankings.
Sevastova cannot match Sharapova for power but possesses excellent court craft and a wicked drop shot.
In the first set that was not enough to combat the Sharapova forehand. The Russian broke early, was pegged back to 4-4 but then clinched it with a series of vicious groundstrokes.
Sevastova stuck to her game-plan, though, probing away intelligently, forcing Sharapova to put all the pace on the ball and dragging the Russian all around the court.
The Latvian broke the Sharapova serve in the third game of the second set, and the five-time grand slam champion found her big weapon a little less reliable.
There was nothing wrong with her improvisational skills, Sharapova playing two left-handed forehands – her second and third of the match – in a single point to hold for 4-3.
Her big chance to level came in the following game but, when her return on break point was called out, Sharapova chose not to challenge. Replays showed it was well in.
Sevastova ran with her luck to win the set and, after Sharapova had taken a long toilet break, dropped just one point in the opening three games of the decider.
Sharapova took a medical time-out to have treatment for what appeared to be a blister on her finger and immediately retrieved one of the breaks, Sevastova suddenly looking very tight.
But the 27-year-old quelled the nerves and won the final three games to set up a quarter-final clash with Sloane Stephens – 10/1 for the title – who continued her remarkable comeback from a year out with a foot injury by beating Julia Goerges.