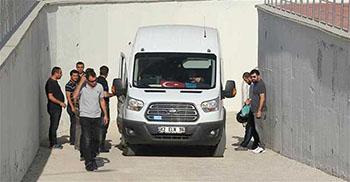 A total of 48 people were arrested over links to the Islamic State of Iraq and the Levant (ISIL) in August across Turkey, according to data gathered by the state-run Anadolu Agency, which said several deadly attacks planned by the jihadist group were prevented by the security forces.

The agency said there were many foreign-origin suspects among the 268 people detained and a high number of ammunition and explosives were seized in the operations.

While operations against the jihadist group inside the country are ongoing, precautions taken on borders are also helping prevent possible attacks.

One operation was carried out in the southeastern province of Gaziantep when police raided a depot used by ISIL and seized a high number of weapons and over 5 tons of ammonium nitrate used in making explosives. Six people were detained during the raid before being arrested.

A family of three was arrested over an attempt to make the explosive triacetone triperoxide (TATP) in the Etimesgut district of the capital Ankara after their bomb endeavor accidentally ended in an explosion at their house.

TATP is mainly preferred by ISIL and al-Qaeda as it cannot be detected easily by bomb-sniffing dogs or detectors.

One of the most highly-debated operations was in Istanbul, when an ISIL militant killed a police officer at a police headquarters. The militant stabbed policeman Sinan Acar to death before being shot and killed and 12 people of foreign origin were detained in relation to the incident.

In the Central Anatolian province of Kırıkkale, it was determined that one of the three arrested Iraqi ISIL militants, identified only by the initials M.H.A., participated in the “Spyker Massacre” in 2014 when the jihadist group executed almost 1,700 people in Iraq.

Another foreign ISIL militant was arrested in the southern province of Adana. A Russian ISIL militant, who was reportedly planning to destroy a U.S. plane stationed at the İncirlik air base in Adana with a drone before staging an attack on an Alevi association, was arrested.

Anti-terror police staged the operation after receiving intelligence that the ISIL militant, Renat Bakiev, was scouting around the province to stage attacks at the İncirlik air base and an Alevi association on behalf of the jihadist group.

A total of 26 suspects detained in the operations carried out in the Black Sea province of Samsun, Gaziantep, the Central Anatolian province of Eskişehir and the eastern province of Elazığ were arrested.
In addition, police apprehended two jihadist militants involved in the killing of an individual identified only as K. Farasi in the southeastern province of Şanlıurfa.

Another militant was apprehended two years after killing two Syrian journalists in Turkey. Yusuf Hamed Eşveri, who was determined to have crossed into Syria after murdering the journalists, was caught in Şanlıurfa and was subsequently arrested.

In the southern province of Hatay, police and teams from the National Intelligence Agency (MİT) tracked a vehicle transporting five ISIL militants.

While four of the militants surrendered after the car was stopped, one attempted to attack the police and was shot in the leg to be “neutralized.” He later died in hospital and four others were arrested.