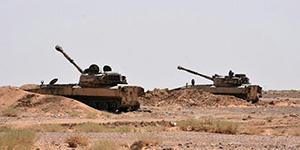 Deir Ezzor/Moscow, SANA – The Army and Armed Forces units operating in al-Badia desert, in cooperation with the supporting forces, continued to advance from two directions to lift the siege on the city of Deir Ezzor, inching closer to Regiment 137 in the western part of the city.

SANA’s reporter said that army units achieved new progress in the direction of the area surrounding Regiment 137 after killing a number of ISIS terrorists who are suffering collapse in their ranks as many of them are fleeing, leaving their weapons and ammunition behind, all while army engineering units are dismantling IEDs to open the way and meet with the Regiment’s garrison.
The reporter added that army units destroyed 12 vehicles rigged with explosives on the different axes in the area surrounding the Regiment, killing all the terrorists who were driving them.
The reporter said that Syrian fighter jets and helicopters directed intensive strikes on ISIS dens and supply routes in the southern and western countryside of Deir Ezzor, destroying a number of its vehicles and killing and injuring many terrorists.
Earlier, the reporter said that an army unit bombarded the main site for ISIS leadership in al-Hawiqa al-Gharbieh neighborhood, destroying the site completely and killing a number of ISIS leaders.
Terrorists Abu Osama al-Zbeide, Abu Omar al-Qarbouli, Abu Mohammed al-ٍٍٍShaeiti, Abu Mariam al-Tayianeh, Abu Mu’awiya Idleb, Abu Dujana Bakras, Abu Ubaida al-Ani and Abu Salman al-Ahwazi and Abu Yacoub al-Muhajer were identified among the dead.
The reporter noted that the Syrian Air Force conducted intensive airstrikes against ISIS positions in the villages of Ayash, al-Shmeitieh, al-Masrab al-Khareita and al-Tebni, and the surroundings of al-Panorama, leaving many terrorists dead.
Local sources told the reporter that large groups of ISIS leaders and terrorists in the eastern and western countryside of Deir Ezzor have fled as the army advances, adding that that a group of locals attacked last night one of the ISIS sites in al-Shehil village to the east of Deir Ezzor, where heavy clashes with light weapons erupted, resulting in the killing and injuring of many terrorists.
Meanwhile, the army units operating on the axis of al-Sukhneh-Hrebshieh killed ISIS terrorists in the surroundings of Kabajib village, 50 km southwest of Deir Ezzor city.
The Russian Defense Ministry announced that Russian warplanes operating in Syria carried out more than 80 combat sorties in conjunction with the Syrian Arab Army’s operations in Deir Ezzor.
In a statement published on its website on Monday, the Ministry said these sorties resulted in destroying 2 tanks for ISIS, 3 vehicles, and more than 10 SUVs equipped with heavy weaponry, in addition killing and injuring more than 70 terrorists.
The Ministry also said that Syrian Arab Army units operating in Raqqa countryside managed to advance 8 km during the past 24 hours, establishing control over two strategic hills, while other units advanced from the direction of al-Sikhneh and chased away terrorists from positions on the road between Palmyra and Deir Ezzor, reaching the outskirts of Kabajib village in Deir Ezzor’s western countryside.
The statement said that the defeat of ISIS in Deir Ezzor countryside and lifting the terrorist organization’s siege on Deir Ezzor city will constitute a strategic defeat for it in Syria.
Shaza / Manar al-Freih / Hazem Sabbagh