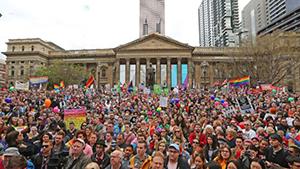 The government plans to hold a non-binding postal survey from next week to gauge support for changing Australia’s law to allow same-sex marriage.
PM Malcolm Turnbull has said the vote could lead to the tabling of a bill in parliament later this year.
Intense campaigning has already begun, but the survey will not go ahead if the legal challenges are successful.
Two separate challenges by same-sex marriage advocates will be heard in the High Court of Australia on Tuesday and Wednesday.
Legal experts believe the court will rule on the matter quickly because the government is planning to mail out surveys from 12 September.
The vote has drawn controversy over its A$122m (£75m; $97m) cost and fears that it will prompt hate-filled campaigns. Many same-sex marriage supporters want parliament alone to debate changing the law.
Both legal challenges argue that the vote is invalid because its funding was not allocated through a normal parliamentary process.
The government unlocked A$122m for the survey through an act allowing it to fund initiatives determined to be “urgent and unforeseen”.
The challengers argue that changing the Marriage Act does not count as an urgent matter, and that the vote was not unforeseen because the idea was first publicly discussed in March.
The other arguments concern whether the body overseeing the vote, the Australian Bureau of Statistics (ABS), has the authority to do so. Australian elections are overseen by the Australian Electoral Commission.
The plaintiffs include two sitting politicians, a lesbian mother and two same-sex marriage lobby groups.
“Telling one group of people that their rights have to be decided by a public vote sends a terrible message,” said Anna Brown, a lawyer involved in one challenge.
Mr Turnbull’s government has repeatedly said it is confident that the court will rule in its favour.
It argues it has the authority to fund the vote, and that the ABS is entitled to conduct it.
“We are confident the challenge to the postal vote on marriage will not be successful, so we are very confident the postal vote will go ahead,” Mr Turnbull said on Thursday.
If ruled valid, the postal survey will run until 27 October and the results will be announced on 15 November.
Mr Turnbull has pledged that a majority vote in support of same-sex marriage would prompt a parliamentary bill with the power to change Australia’s Marriage Act.
However, MPs would not be bound to vote in line with the public.
Successive polls have suggested a majority of Australians support legalising same-sex marriage.