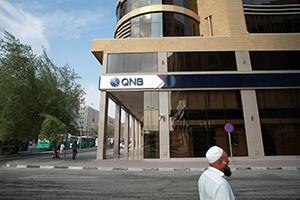 Doha Bank QSC is talking to foreign lenders about the possibility of raising long-term funding either through a private placement or public debt sale, according to Chief Executive Officer Raghavan Seetharaman.

The bank plans to raise debt after completing a 1.3 billion riyal ($352.9 million) rights offer earlier this year, Seetharaman said in an interview with Bloomberg TV on Monday, without disclosing how much more it could raise.

Doha Bank is among Qatari lenders considering options to raise financing, people familiar with the matter said in August, as an ongoing standoff with its Gulf neighbors threatens to weaken liquidity. Qatar National Bank QPSC is also said to have held early discussions with international banks about the possibility of a private placement, bond sale or loan. Saudi Arabia, the United Arab Emirates, Bahrain and Egypt cut diplomatic relations and closed transport routes on June 5, accusing the nation of funding Islamist terrorism, a charge it denies.
Deposits Drop
Foreign deposits dropped the most in two years in June and may fall further as some Gulf lenders refuse to roll over holdings, people with knowledge of the matter said in August.

Lenders in the gas-rich Gulf state “don’t have any major issues with liquidity” after the government provided extra funds for the banking sector, though borrowing costs for lenders have risen “slightly” since the boycott began, Seetharaman said. Doha Bank is also exploring the possibility of selling some of its assets in the U.A.E., he said.