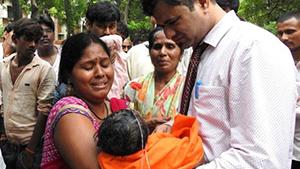 Indian police are investigating the deaths of dozens of newborns at a hospital in Farrukhabad, Uttar Pradesh.

Forty-nine children died at Ram Manohar Lohia hospital in a month, including at least 30 who are said to have died from “perinatal asphyxia”.
The condition is caused by reduced oxygen levels during childbirth.
In August at least 160 minors died at a Gorakhpur hospital, in the same state. Some of the deaths there were also allegedly caused by lack of oxygen.
But senior government officials have denied that this was the case in either hospital.
In the most recent investigation, a government report blamed medical staff for 30 deaths, prompting the launch of a police investigation.
The Press Trust of India reports that those 30 died from an apparent lack of oxygen while in intensive care at Ram Manohar Lohia hospital. Another 19 infants, who did not survive childbirth, were not part of the government report, the news agency said.
All 49 deaths happened between 21 July and 20 August.
12 August: News emerges that at least 60 children died in Baba Raghav Das hospital in Gorakhpur. Thirty died in just two days. Reports said there was a shortage of oxygen – which the state and hospital deny – but family members said they had to manually squeeze artificial bags to aid breathing. By 16 August, the death toll had risen to more than 100 children.
Initial reports suggested that the hospital’s oxygen supply had been cut by a private supplier over unpaid bills of more than 6m rupees ($93,500; £72,500).
27-29 August: Another 60 children, including 31 infants, die at the same hospital. Officials said there was no oxygen shortage, but blamed a high rate of disease from the monsoon season – saying that many child patients arrive in critical condition.
4 September: Police begin the investigation into at least 30 of the 49 deaths at Ram Manohar Lohia hospital in Farrukhabad.
Police said that in the Farrukhabad case, the hospital “did not insert oxygen pipes [into infants’ windpipes] after birth”.
The region is one the poorest in India and records hundreds of deaths of children due to various diseases, including encephalitis, every year.
Encephalitis, which is common in Gorakhpur, is a life-threatening inflammation in the brain. Very young children and the elderly are particularly at risk, and it has numerous causes, including bacterial or viral infection.