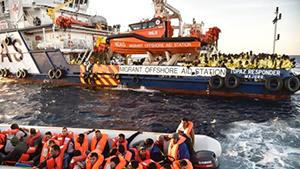 An organisation which says it has saved more than 40,000 people from the Mediterranean is to move its operations to Asia to help the Rohingya people.

The Migrant Offshore Aid Station (MOAS) is relocating from Malta, where it has been rescuing migrants since 2014, to the waters off Myanmar.
The decision comes as the number of Rohingya fleeing to Bangladesh reached 87,000, according to UN estimates.
However, it was also made amid an unclear climate in Libya.
The organisation worries that Europe’s emphasis on stopping migrants leaving Libya as it tries to stabilise the country is putting people’s lives at risk, with it becoming “increasingly unclear” if those they rescued could be left in a safe place, it says.
MOAS co-founder Regina Catrambone explained to supporters: “At present, there are too many questions without an answer, and too many doubts about those trapped or forced back to Libya.
“The horrific tales of those who survive depict a nightmare of abuse, violence, torture, kidnapping and extortion.
“MOAS does not want to become part of a scenario where no one pays attention to the people who deserve protection, instead only focusing on preventing them from arriving on European shores with no consideration of their fate when trapped on the other side of the sea.”
However Mrs Catrambone and MOAS said they were keen not to let what they had built over three years go to waste, and which was why they had decided to redeploy their flagship vehicle, the Phoenix, thousands of miles east, for its next mission.
The ship is expected to take about three weeks to reach the Bay of Bengal.
The organisation said that the boat “will deliver much-needed humanitarian assistance and aid to the Rohingya people, and will work to provide a platform for transparency, advocacy and accountability in the region”.
The Rohingya are a stateless Muslim ethnic minority who have faced persecution in Myanmar. Many of those who have fled describe troops and Buddhist mobs burning their villages and attacking civilians in the province in Rakhine.
The United Nations has described them as the most persecuted people on earth, with Pope Francis appealing for an end to violence on 27 August.
A note on terminology: The BBC uses the term migrant to refer to all people on the move who have yet to complete the legal process of claiming asylum. This group includes people fleeing war-torn countries such as Syria, who are likely to be granted refugee status, as well as people who are seeking jobs and better lives, who governments are likely to rule are economic migrants.