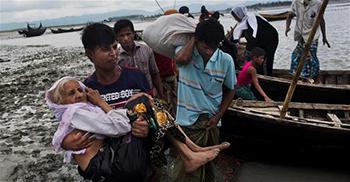 A total of 87,000 mostly Rohingya refugees have arrived in Bangladesh since violence erupted in neighbouring Myanmar on Aug. 25, the United Nations said Sept. 4, amid growing international criticism of Aung San Suu Kyi.

Thousands of the stateless Muslim minority have fled the mainly Buddhist nation and poured over the border since the latest round of fighting broke out, piling pressure on the already overcrowded camps in Bangladesh.

Around 20,000 more were massed on the border between Bangladesh and Myanmar’s western state of Rakhine and waiting to enter, the U.N. said in a report.

Dhaka had stepped up border controls after the latest round of violence began 10 days ago, but the U.N. said recent arrivals reported there had been no attempt to stop them from crossing.

One Bangladeshi border guard told AFP the sheer numbers of people desperate to enter the country had made it impossible to stop the influx.

“It is bigger than the last time,” said the guard, who asked not to be named, referring to the influx of refugees that followed an outbreak of violence last October.

“If it continues then we will face serious problems. But it’s impossible to stop the flow, these people are everywhere,” he added.

The U.N. said most of the new arrivals were in the squalid camps already housing hundreds of thousands of Rohingya refugees around the coastal town of Cox’s Bazar.

But many lacked shelter from the heavy monsoon rains and an AFP reporter on the ground said hundreds of new makeshift shelters had sprung up on the outskirts of the sprawling camps in recent days.

“It has been raining frequently since last week. We have to keep our children safe from being sick,” said Amena Begum, a newly arrived mother of five.

Refugees in Cox’s Bazar have alleged their families were massacred and villages torched by security forces and Buddhist mobs.

The latest clashes broke out when Rohingya militants attacked security installations
Myanmar accuses the militants — which it describes as “Bengali terrorists” — of setting fire to Rohingya houses and those of other communities.

De facto leader Aung San Suu Kyi, a former political prisoner of Myanmar’s junta, has come under increasing fire over her perceived unwillingness to speak out against the treatment of the Rohingya or chastise the military.

She has made no public comment since the latest fighting broke out.

“Over the last several years I have repeatedly condemned this tragic and shameful treatment,” Pakistani activist and fellow Nobel peace prize laureate Malala Yousafzai said in a statement about the Rohingya crisis on Twitter.

“I am still waiting for my fellow Nobel laureate Aung San Suu Kyi to do the same.”

The crisis threatens Myanmar’s diplomatic relations, particularly with Muslim-majority countries in Southeast Asia where there is profound public anger over the treatment of the Rohingya.

Indonesia’s Foreign Minister Retno Marsudi met Myanmar’s army chief General Min Aung Hlaing in Naypyidaw on Sept. 4 to try to pressure the government to do more to alleviate the crisis.

President Recep Tayyip Erdoğan, meanwhile, has said that he will bring the issue to the table during the U.N. General Assembly on Sept. 19.

“We’ll discuss these with the leaders there,” Erdoğan said in Istanbul on Sept. 4.

Rakhine has been a crucible of religious violence since 2012, when riots erupted. Scores of Rohingya were killed and tens of thousands of people — the majority from the Muslim minority — were forced into displacement camps.

But the current round of fighting is the worst yet.

Scores of people have drowned while attempting to flee the violence by crossing the Naf border river into Bangladesh.

Bangladeshi coastguards have said many migrants are travelling on rickety fishing boats unsuitable for the rough waters.

On Sept. 4 police in Bangladesh said the body of a Rohingya woman had washed ashore, bringing the total number of drowned to 54.

Most of those entering Bangladesh are women, children or elderly men, and the refugees say that many young men have stayed behind to fight.

Bangladesh was already home to an estimated 400,000 Rohingya before the latest influx and has made clear it doesn not want more coming in.

It has pushed a number of them back, in what rights groups say is a contravention of its international obligations.