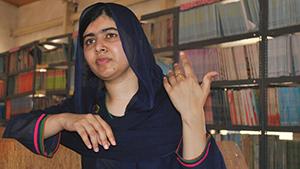 By Nicola Smith
Taipei: Malala Yousafzai, the Pakistani Nobel Peace laureate, has added her voice argainst the Myanmar army’s brutal crackdown on the Rohingya Muslim minority and the failure of Aung San Suu Kyi, the country’s civilian de facto leader, to stop it.

Nearly 90,000 Rohingya have poured into Bangladesh from Myanmar over the past 10 days after a military operation in western Rakhine state, which has led to security forces standing accused of widespread arson and indiscriminate killing of civilians, including beheading and drowning children.
While the official death toll is 400, human rights activists claim there are at least 1000 casualties among the Rohingya people – described by some as the world’s most persecuted minority.
Aung San Suu Kyi, the formerly feted political prisoner of Myanmar’s junta, and a Nobel Peace laureate herself, has come under increasing criticism over her perceived reluctance to condemn the military’s harsh treatment of Rohingya civilians.
But she has made no comment since the latest fighting broke out, a silence that Malala, who survived being shot in the head by the Pakistani Taliban when she was just 15, has urged Suu Kyi to break.
“Stop the violence. Today we have seen pictures of small children killed by Myanmar’s security forces,” Malala said in a statement on Twitter.
“Over the last several years, I have repeatedly condemned this tragic and shameful treatment. I am still waiting for my fellow Nobel laureate Aung San Suu Kyi to do the same. The world is waiting and the Rohingya Muslims are waiting,” she added.
In a rebuke to the Myanmar government which considers the Rohingya to be illegal migrants from Bangladesh, Malala fired:
“If their home is not Myanmar, where they have lived for generations, then where is it? ROhingya people should be given citizenship in Myanmar, the country where they were born.”
The latest violence broke out on August 25 after insurgents from the Arakan Rohingya Salvation Army (ARSA) attacked Myanmar paramilitary posts.
But conflict has raged in Rakhine since October, after a similar ambush on border posts. It has been the worst witnessed in the state in years, with the United Nations reporting that the army may have committed ethnic cleansing.
Human rights activists on the Myanmar-Bangladesh border have described horrific conditions as refugees flee in fear of their lives.
“There are enormous numbers of people arriving. The Burmese military is basically clearing out all of the Rohingya Muslim villages in northern Rakhine state,” said Matthew Smith, the chief executive of Fortify Rights, a human rights organisation. “People are desperately in need of shelter, food, clothing. There are a lot of people sleeping under the rain, in the mud.”
Smith’s organisation has documented allegations of heinous crimes against entire families. “State security forces have been killing men, women and children,” he said. “They have been slitting throats, there have been beheadings. Soldiers have opened fire on groups of people and then set the bodies on fire, including children.”
Muslim countries in south-east Asia are incensed at mounting reports of atrocities. The Maldives said yesterday that it would sever all trade ties with Myanmar, while Javad Zarif, Iran’s foreign minister, called for international action to “prevent further ethnic cleansing”. Pakistan’s foreign ministry said it was “deeply concerned”, while Joko Widodo, the president of Indonesia, said “this humanitarian crisis has to stop immediately”.
The Malta-based Migrant Offshore Aid Station, a humanitarian organisation that has saved the lives of 40,000 migrants in the Mediterranean, announced it would redeploy its flagship to south-east Asia to help Rohingya refugees fleeing from Myanmar to Bangladesh.
The not-for-profit has suspended its operations in the Med, citing security concerns and “increasing instability” off the coast of Libya.
Telegraph, London