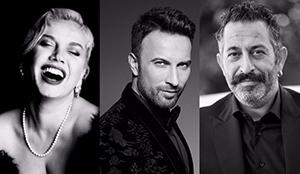 Ersin Ramoğlu, a columnist for the Sabah daily, on Monday accused world-famous Turkish pop star Tarkan Tevetoğlu, aka Tarkan, along with renowned comedian Cem Yılmaz and famous singer Sezen Aksu, of being sympathizers of the faith-based Gülen movement, which the Turkish government accuses of masterminding a failed coup last year.

Ramoğlu said that in addition to Tarkan other stars in Turkey are critical of the ruling Justice and Development Party (AKP) government and President Recep Tayyip Erdoğan due to their links to the movement.

According to Ramoğlu, famous Turkish singer Sezen Aksu is connected to the movement since her father was the founding principal of Yamanlar College in İzmir, which was closed down by the government due to alleged Gülen links.

Inaccurately, Ramoğlu also claimed renowned Turkish comedian Cem Yılmaz is linked to the movement through his brother Metin Can Yılmaz, saying his marriage to Dilara Altaylı, daughter of a former National Intelligence Organization (MİT) member Enver Altaylı, was arranged by an associate of Gülen.

Altaylı was arrested on Aug. 27 over his alleged ties to the movement.

Following Ramoğlu’s claims, Cem Yılmaz made an announcement on Twitter, saying the person Ramoğlu is talking about in his column is not his brother, but some other person who has the same name as him. He also asked Sabah to apologize to the Yılmaz family due to the fake news from Ramoğlu.

Yılmaz’s brother Can Yılmaz also reacted negatively to Ramoğlu on Twitter, saying: “There is no fear of God [by the pro-government media]. They are never humiliated by their bad actions. Will they feel ashamed now? I don’t think so.”

After Erdoğan and the AKP put the blame on the Gülen movement for the failed coup immediately following the incident on July 15, 2016, over 146,000 people were fired from state jobs, nearly 125,000 detained and over 58,000 arrested over alleged links to the movement.

Gülen and his movement strongly deny any involvement in the coup attempt.