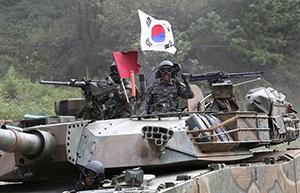 UNITED NATIONS, September 5. /TASS/. The risk of the confrontation on the Korean Peninsula developing into a hot phase is “high as never before,” Russia’s UN envoy Vasily Nebenzya told an emergency meeting of the UN Security Council on Monday.

He said North Korea’s provocative missile and nuclear activity acquired “dangerous dynamics lately” and peace in the region was experiencing a “serious test.”

“The risk of the confrontation developing into a hot phase is high as never before,” he said.

Nebenzya warned against attempts at trying to resolve the Korean Peninsula’s problems by military means and called upon all parties to “retain self-control” and to “refrain from any actions that might bring about further escalation of tensions.”

He believes the international community should not “succumb to emotion” but act “calmly and in a balanced way.” Nebenzya recalled the Russian-Chinese roadmap plan aimed at de-escalation and political and diplomatic settlement of the situation over North Korea.

He criticized the North Korean authorities for undermining non-proliferation and for posing a major threat to international peace and security. Attempts to push ahead with a policy like this would be fraught with “dire consequences for North Korea itself,” he stated.

On Sunday, North Korea officially announced a successful test of a hydrogen bomb that could be used as a warhead for an intercontinental ballistic missile. The news met tough reaction of the world community. North Korea’s actions were condemned by many countries, including China and Russia. South Korea and the United States said they did not rule out a possible military response to North Korea’s actions.

The Russian foreign ministry called on all parties concerned to immediately get back to dialogue and talks as the only possible way to reach an all-round settlement on the Korean Peninsula.