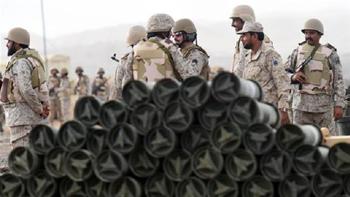 Forsaking the UN’s customary diplomatic stance, a leading official has directly blamed the Saudi-led coalition for Yemen’s devastating humanitarian crisis, urging Riyadh to fund aid and stop the conflict, which has raged since 2015.
“Saudi Arabia should fund 100 percent of the needs of the humanitarian crisis in Yemen,” David Beasley, executive director of the United Nations World Food Programme told Reuters, during a visit to Ethiopia. “Either stop the war or fund the crisis. Option three is, do both of them.”

With assistance from the US vessels, Saudi Arabia has imposed a naval blockade, as well as shutting key airports, in a bid to tip the balance in the stalemate between the deposed government it supports, and the Houthi rebels. According to a joint statement from several leading UN agencies in July, 60 percent of Yemen’s 27 million people are suffering from food insecurity, while 2 million children are acutely malnourished.
Particularly problematic is control over the port of Hodeidah, which was previously responsible for 80 percent of all food imports into the water-scarce country.
“We are having problems with access,” said Beasley.
“The Saudis have created serious complications for us because of the port being blockaded to a certain degree, and the destroying of the cranes at Hodeidah port… That has substantially reduced our capacity to bring food in.”
The airspace and naval blockade has not only caused food and water shortages but also resulted in gravely ill patients being denied urgent treatment overseas. One of the latest high-profile victims of limited access to healthcare was Abdullah Alkhames, the founder and longtime general secretary of the Yemeni Red Crescent, who died in a hospital in Sana’a last Thursday following heart surgery. According to his son, Zubair, the 76-year-old doctor died while waiting to be put on a list of patients to be sent to Egypt or Jordan for treatment. Since there are very few humanitarian flights in or out of Yemen, his father died before he could have another stent operation on his heart.
“Of course, he died because of lack of access to life-saving medicine,” his son told The Guardian. He noted that even if the necessary medical equipment such as stents is to be still found in Yemen, it is grossly overpriced and might take up to a week to deliver.
Iolanda Jaquemet, the Middle East spokesperson for the International Committee of the Red Cross (ICRC), linked the death of the renowned doctor to the dire humanitarian situation in the war-ravaged country, adding that many more patients face his fate.
“He died prematurely, indeed and he died for the same reason as millions of people suffering in Yemen,” Jaquemet told RT.
“Over half of the Yemeni population, that is 14 million people out of 27 million, have no access to healthcare,” she said, speaking of the unprecedented cholera outbreak ravaging the country, which has now exceeded 607,000 suspected cases.
“We speak of a country where over half the population has no access to clean water, a country where 7 million people are considered to be close to famine, where millions of women and children are severely acutely malnourished,” Jaquemet said.
She added that “only a political solution from all those involved” can put an end to the country’s acute humanitarian crisis.