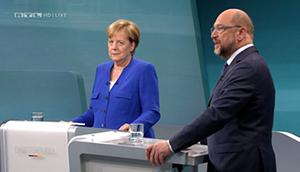 Judy Dempsey
Angela Merkel and other party leaders are dodging strategic issues that can no longer be brushed aside.

Maybe it’s too much to expect Angela Merkel to challenge German voters. As she makes a so-far unchallenged bid to get elected chancellor for a fourth time on September 24, Merkel, with very few exceptions, is playing it safe.
The so-called television duel during prime time viewing on September 3, between herself and her Social Democratic Party (SPD) contender Martin Schulz, put Germans back in their comfort zone. And since a comfort zone rejects controversy and prefers stability and the status quo, Merkel and Schulz delivered. With one big exception: Turkey.
Ever since Merkel negotiated an EU deal over a year ago with Turkish President Recep Tayyip Erdoğan, under which Ankara would take back Syrian migrants from Greece if they did not apply for asylum or if their claim was rejected, she was reluctant to criticize how Erdoğan has moved his county toward authoritarianism.
It was only when Deniz Yücel, a German citizen of Turkish origin, was detained back in February did Merkel begin to speak out. Cautiously. She did not want to jeopardize the deal made with the Turkish president.
But recently, something has snapped within Merkel. It’s not because Erdoğan accused Germany of “Nazi tactics,” which Merkel eloquently responded to. It’s not because Merkel is criticizing Erdoğan’s policies for opportunistic reasons.
It’s not because she wants to match the tough rhetoric of her Social Democrat Foreign Minister Sigmar Gabriel. It’s because, finally, Merkel knows what is at stake for Turkey’s democrats, its civil society, and its future. It is about the values that underpin an open society. By stating during the television debate that she would talk to her EU counterparts about “a joint position so that we can end these accession talks [with Turkey],” Merkel made clear her two positions.
The first is that the German chancellor opposes Turkey joining the EU. She has consistently supported the idea of a special partnership with Ankara. However, she has never blocked the accession talks— not that other EU countries have tried to hold them up. Erdoğan’s continuing crackdown on the rule of law, the judges, journalists, and the opposition has finally become too much for Merkel.
Erdoğan reacted to Merkel’s comments. He accused Berlin of fueling discrimination and racism, but Merkel is standing firm.
Her second position is with regard to values. Merkel has given safety to Turkish army officers and others who fled the country after the failed coup over a year ago. Until recently, certainly with regard to Turkey, the German government was trying to balance realpolitik with values. The scales have now been tipped in favor of values.
Given that Merkel and Schulz are at one over Turkey, what about Russia—which has barely got a look in during all of the recent debates?
Germany’s intelligence services are taking no chances when it comes to the Kremlin’s attempts to influence this election through fake news, after Russian rivals were accused of hacking into the Bundestag computer systems in May. The public has been repeatedly warned about how Moscow might interfere in the election.
And yes, the Social Democrats were put on the spot when their former chancellor Gerhard Schröder was appointed a non-executive board member of Rosneft. Rosneft just happens to be on the EU sanctions list because of Russia’s military interference in eastern Ukraine and its annexation of Crimea in February 2014. But criticism of Russia, or rather of Schröder, has already stopped there.
Neither Merkel nor Schulz has dared to call for Nord Stream 2 to be scrapped. This second pipeline, being built under the Baltic Sea and being led by Gazprom and a European consortium that includes German energy companies, does hardly anything to reduce Germany’s dependence on Russian energy.
And with few exceptions, German politicians are not criticizing the detention of Kirill Serebrennikov, director of the Gogol Theatre in Moscow who has been under house arrest over allegations of fraud since August 22.
Yet, the threat to cut off EU accession talks with Turkey, and expressing some mealymouthed criticism of Schröder, does not represent a strategy by Berlin over how to deal with these two important countries.
Whoever is elected the next German chancellor can implement a few crucial, long-term measures on Turkey and Russia. One includes supporting civil society as much as possible, whether that consists of movements or individuals. Second is to ensure support for independent media, be it the internet, radio, television, or newspapers. Third is to facilitate exchange study and training programs. None of these goals are insurmountable. Of course, Erdoğan and Putin can accuse Berlin—which should make sure it gets the support of the other EU member states—of interference, as if both leaders are innocent on that charge in their relations with Berlin. However, Germany can claim it is simply standing up for basic values.
Putin and Erdoğan can also use the media to lambast Germany, as if that is nothing new. But it is how Germany responds that matters to Turkish and Russian citizens.
During a recent visit to a leading German multinational company, one of its regional directors, a Turk, had only praise for Merkel. “Plain, tough speaking, and sticking to your values matters so much to us back home,” he told me. “Turkey isn’t Erdoğan. What Merkel said about our country during the TV duel was important for those who don’t support Erdoğan.”