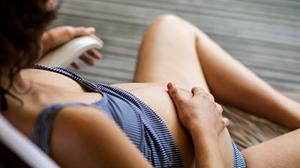 After years of trying, Zoe Marshall has announced she is pregnant with her first child.

The 33-year-old media personality and wife of NRL player Benji has been battling stage-four endometriosis and believed she may have been infertile.

“We always knew we wanted a baby, so living with that uncertainty was tough. It was always in the back of my mind,” she tells Woman’s Day in their latest issue.

I call him every day to quit. Maybe that’s why he isn’t answering my texts?

Six months ago she says she tried Dr Shaquan Lius “radical” Chinese Medicine program where, in an effort to “reset” the body’s organ function, patients consume nothing but Chinese herbs and receive daily acupuncture and massage for two weeks before very slowly reintroducing food.

Marshall attributes her success falling pregnant to the program, which she believes, alleviated her symptoms and the fertility issues that come with endometriosis.

“I felt a mix of relief and happiness because I really didn’t know if this was going to happen for me,” says Marshall, who is due in February, of discovering she was pregnant.

Such an extreme approach is not necessary, but diet can have a significant impact on the fertility of men and women. This is particularly the case for those with endometriosis, a chronic inflammatory condition which affects 1 in 10 Australian women.

Why? because nutrition can influence inflammation and hormone (especially oestrogen) levels.

“Anti-inflammatory foods such as fish and walnuts have been found to be helpful for many women,” explains fertility dietitian Melanie McGrice, who adds that she doesn’t know enough about the specifics of the Dr Liu program to comment.

“Trans-fat consumption has been linked to an increased risk of endometriosis and an increase in inflammation.”

Sources of trans fats, which include fried foods, margarine, cakes, pastries, biscuits and some vegetable oils (not olive oil) should be “limited as much as possible”.

Plants in general, as the staple of any dietary approach, are beneficial for a number of reasons.

As well as decreasing the risk of developing endometriosis, with their abundance of antioxidants and fibre greens can alleviate endometriosis symptoms as well.

The fibre from vegetables can also help the body to flush excess oestrogen, which “may promote inflammation and contribute to the severity of endometriosis symptoms”.

Where possible, McGrice advises women with endometriosis to avoid pesticides, which have been linked with exacerbated symptoms.

“This may be due to certain pesticides interfering with hormonal pathways and contributing to oxidative stress. It has even been found that fruit consumption can actually worsen the symptoms of endometriosis, however it is likely this is due to higher levels of pesticide residue and dioxins being found on some fruits,” says McGrice, who runs an online fertility program.

“Women with endometriosis may wish to consider trying organic produce, which would remove the risk of pesticides worsening their symptoms while still getting all the benefits of eating fruit and vegetables.”

While one third of women with endometriosis struggle to become pregnant (infertility is defined as 12 months of unprotected sexual intercourse that does not result in pregnancy) along with about 30 per cent of women over 35, with the right support and information, women can tweak their lifestyle to give themselves the best possible chance.

“There is now a lot that we can now do,” McGrice says.