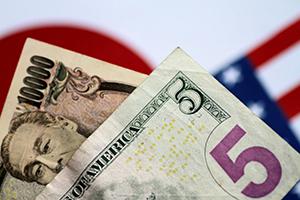 Masayuki Kitano
SINGAPORE (Reuters) – The dollar edged down against the yen on Wednesday, getting closer to a recent 4-1/2 month low, pressured by simmering tensions on the Korean peninsula and on comments by a Federal Reserve official about low U.S. inflation.

A top North Korean diplomat on Tuesday warned that his country was ready to send “more gift packages” to the United States as world powers struggled for a response to Pyongyang’s latest nuclear weapons test.

The yen and the Swiss franc have both risen this week, as geopolitical tensions flared anew after North Korea conducted a powerful nuclear test on Sunday, dampening investors’ appetite for riskier assets.

The yen almost always gains when investors try to reduce exposure to risk because the currency is often used as a funding source to buy riskier, higher-yielding assets. Japan is also the world’s largest net creditor nation, and at times of uncertainty traders assume Japanese repatriation from foreign countries will eclipse foreign investors’ selling of Japanese assets.

As a result, the yen has continued to behave as a safe-haven currency despite Japan’s proximity to North Korea.

The Swiss franc rose around 0.1 percent to 0.9538 franc per dollar CHF=, with the franc having gained about 1.1 percent so far this week.

Adding to pressure on the dollar, Federal Reserve Governor Lael Brainard said on Tuesday that inflation was “well short” of target, so the Fed should be cautious about raising U.S. interest rates. Analysts said the comments cast more doubt over the likelihood of another rate hike this year. Brainard, a permanent voting member on the Fed’s monetary policy committee, has in the past convinced colleagues to delay tightening.

“We all know she’s really dovish…but her comments were pretty explicit regarding inflation. She didn’t mince her words,” said Stephen Innes, head of trading in Asia-Pacific for Oanda in Singapore, referring to Brainard’s remarks.

Traders may try to sell the dollar if it bounces against the yen, given the ongoing focus on North Korean risks, he added.

The Canadian dollar last traded at C$1.2369 CAD=D4 per U.S. dollar, having set a two-year high of C$1.2336 on Tuesday ahead of a Bank of Canada interest rate decision on Wednesday.

The Canadian dollar has been pushing higher after data last week showed that Canada’s economy recorded its strongest growth in nearly six years in the second quarter, stoking speculation the Bank of Canada could raise interest rates as early as this week.

In a Reuters poll published on Friday, 24 of 33 economists surveyed said Canada’s central bank was most likely to raise interest rates in October.

Still, six forecast that rates would rise on Wednesday to 1.0 percent, with several changing their view after the strong second-quarter GDP data.