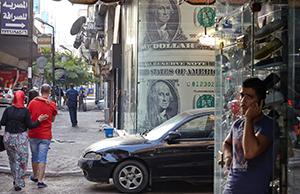 By Mirette Magdy
Egypt has cleared a multibillion-dollar backlog of foreign-currency requests from importers and foreign companies since floating the pound in November, a central bank official said, the latest sign that the economy is recovering from a paralyzing dollar shortage.

The banking system is also meeting new foreign-currency requests without delay, the official said on condition of anonymity. The bank shared previously unpublished data with Bloomberg, showing that $1.5 billion in pending requests from multinationals to transfer to mother companies or pay suppliers have been cleared. Some $552 million has been made available to foreign companies seeking to remit dividends.
The figures add to growing evidence that Egypt’s external finances have improved since abandoning most currency controls in November as part of a sweeping economic program that helped clinch a $12 billion International Monetary Fund loan. Central bank reserves have almost doubled to $36 billion in July. International investors have poured billions into Egyptian local-currency debt.
Foreign companies and importers had struggled to obtain dollars since the 2011 uprising against President Hosni Mubarak, which drove away foreign investors and tourists. The currency crunch had become so acute that companies were finding it difficult secure letters of credit, leaving some $800 million of shipments stuck in the country’s ports. Those have now also been cleared.
“The figures confirm the economy is recovering and is increasingly able to generate more of its FX needs,” said Reham ElDesoki, senior economist at regional investment bank Arqaam Capital. Increased transparency from the central bank, in line with its commitments to the IMF, was welcome and would help to reassure investors, she said.
More Transactions
The central bank official said the increased availability of foreign currency in the banking system had boosted trading on the interbank system, as some banks were now selling their surplus dollars through it. An outstanding $2.1 billion in requests made by importers and other businesses seeking to settle temporary overdrafts taken out before the flotation have also been cleared.
In total, $49 billion of trade-financing transactions were executed between the flotation of the pound and August, the official said.
The pound has lost half its value since it was floated, and now trades at about 17.6 per dollar. The weaker currency, along with subsidy cuts, the introduction of value-added taxation and a sharp increase in import duties on hundreds of goods, have propelled inflation to more than 30 percent — the highest level in more than a decade.
The state-run oil company Egyptian General Petroleum Corporation received foreign-currency allocations of $6 billion between November and July for new trade deals, the official said, as well as $2 billion to pay part of its arrears to international oil companies built up during the dollar crunch. The company’s outstanding debt is not counted as part of the foreign-currency backlog in the banking system.
— With assistance by Lin Noueihed