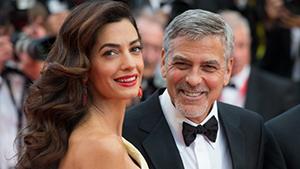 After admitting last week that parenthood is “terrifying”, George Clooney has shared more about his life as a new dad – including how he and wife, Amal, chose their twins’ names.

Appearing at the Venice Film Festival to promote his upcoming film Suburbicon, Clooney spoke to Entertainment Tonight, alongside friend Matt Damon, about 12-week-old Ella and Alexander.
When it came to choosing their little one’s monikers, Clooney explained the couple “just didn’t want to have really dumb names”, particularly given their children will be growing up in the spotlight.
Rather than Saint, or Rocket, the pair decided to go with “normal”.
“We figured these kids are going to be looked at a lot and watched and every move sort of judged,” he said.
“We wanted them to at least have a break with the names. So we looked for some sort of normal names. We didn’t have any great inspiration. It wasn’t Alexander the Great and Ella Fitzgerald.”
The 56-year-old first time dad explained how his son and daughter already had distinctive personalities.
“They start out with a personality right off the bat,” he said, adding that Alexander is a “thug” already.
“You saw him,” he said to Damon of his son. “He’s a moose! Literally, he just sits and he eats.”

“He looks like he could bounce right now,” Damon responded.
“Like, checking IDs on the way into the nursery.”
The proud dad described that Alexander’s sister, Ella, however, takes after her mum. “She’s very elegant, and all eyes,” Clooney said adding that “she looks like Amal.”
Saying that fatherhood had made him “much older”, Clooney gushed about Amal, describing his wife as being “like an olympic athlete”.
“You’ve got two kids,” he said. “You’re breastfeeding like crazy.”
But while he may not be doing parenthood at an olympic level like his wife, there’s one aspect Clooney’s got down pat.
“I’m very good at diaper changing,” he said.
The father-of-two also shared the “realest” moment of parenthood thus far.
“I suppose just the minute they came out,” he said. “None of it is real until all of a sudden they’re standing there covered in slime and crying. You’re like, wait a minute, what is that? We were just two and now we’re four.”
“Everything changes pretty quickly.”